A DAY IN THE LIFE (of Chicago): Illinois ain’t ready for reform either 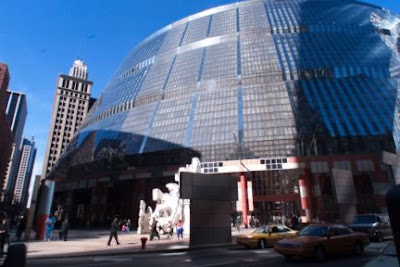 If Chicago wasn't ready for reform in '55, then the actions at the Thompson Center on Thursday showed that Illinois still isn't ready in '09. Photograph provided by State of Illinois.

In theory, the Democratic leaders of the Illinois House of Representatives and state Senate worked with Gov. Pat Quinn earlier this year to create a bill that would bring significant reform to the state’s laws concerning campaign finance.

Yet Quinn used his veto power Thursday to kill the measure that was approved by the General Assembly. And it was House Speaker Michael Madigan and Senate President John Cullerton, both Chicago Democrats, who urged him to do it.

SOUND STUPID? IT shouldn’t, at least not by the political realities of Illinois.

This was the bill that was only considered by the General Assembly because legislators wanted the appearance that they were trying to reform state law in the wake of the behavior of Rod Blagojevich – the governor who has since been impeached and indicted by federal prosecutors.

It’s not like legislators would have touched the issue under any other circumstances. They definitely didn’t want to start making changes that might impact their own chances for future re-election.

The resulting bill was so filled with compromises and half-hearted measures that many of the good government types who want serious reform were willing to see this bill wither away.

IT IS WHY Quinn, who historically has aligned himself with the good government types to the detriment of his political ambitions, can say with a straight face that his veto of campaign finance reform will not hurt him politically.

“Many, many people felt that we should go back to the drawing board,” the governor said, when issuing the veto. Excuse me for being skeptical of the political rhetoric that such efforts might take place when the General Assembly reconvenes next month.

In fact, the only controversy came due to early reports from the Associated Press, which claimed early in the day that Quinn would use “amendatory veto” powers to try to change the bill. Instead, he kissed it goodbye. Who knows when the state Legislature will feel compelled to take the issue up again.

What else was notable on the Chicago news scene?

WHAT BALLPARK TAUNTS ARE APPROPRIATE?: Let me say up front that one of the differences I have observed throughout the years of the different ballpark “cultures” surrounding the Chicago Cubs and White Sox involves race.

I’m not saying that no black people care about the Cubs, but it always struck me that there were fewer African-Americans as part of the Wrigley Field scene compared to U.S. Cellular Field – and that very fact was a part of the attraction for some of the white fans who go to Cubs games rather than see the White Sox (where there is some racial interaction, and where the fans sometimes behave badly).

So when I read reports that Cubs outfielder Milton Bradley, whose weak hitting is part of the reason the Cubs are not “fine in ’09,” says he has heard racist taunts coming from the stands (http://www.suntimes.com/sports/baseball/cubs/1737720,CST-SPT-cub27.article) at Wrigley Field, a part of me was not the least bit shocked. I’m not saying that every Cubs fan in the ballpark is a racist.

But is it possible that the bleacher crowd that thinks getting a little unruly is a part of the stadium experience and also may think that razzing a ballplayer is part of why they pay so much for tickets will include certain crude, naughty taunts? Of course they will. Anyone who says otherwise is living in a fantasyland – perhaps the same place where the Cubs are perpetual contenders.

A NEW D.C. ATTRACTION, VIA CHICAGO: A month ago, it was rusting away and some raccoons had taken to living inside it. Now, it is destined to become a part of our history, put on display as part of the Smithsonian Institute’s new museum on African-American culture.

I’m referring to the casket that for a few decades contained the well-preserved remains of Emmett Till, the boy killed by Southern racists for violating their sensibilities of public behavior. When his body was exhumed a few years ago for some tests, it was reburied in a new casket.

But because we’re talking Burr Oak Cemetery in Alsip, it turns out that the issue wouldn’t just go away. The old casket wound up sitting abandoned in a tool shed and some animals were living inside it. It was only because of the investigation into practices at the historically African-American cemetery that it was discovered.

Now, the Chicago Tribune reports (http://www.chicagotribune.com/news/local/chi-emmett-till-casketaug27,0,4384363.story) that the old casket will be donated by the Till family to the museum being developed in Washington. Come 2015, we can all check it out, if we’re so inclined.

OUCH! TODD’S EGO TAKES A BLOW: Cook County Board President Todd Stroger will never be able to live down his latest injury – a blow to the head while playing basketball that caused him to get eight stitches at the county hospital named as a tribute to his father, John.

People who are determined to trash Todd are going to come up with many different facets of this “issue” with which to criticize him.

What was he doing playing basketball at 2 p.m. on a weekday? Shouldn’t he have been working? And how does anyone manage to get into the one-time Cook County Hospital, get treatment and get released within a couple of hours, unless there was some sort of favoritism showed in treatment?

And not only that, but how bad of a ballplayer must Todd Stroger be if he manages to get that roughed up during a pickup game held at the East Bank Club earlier this week. Somehow, I have the feeling the blow to his ego is worse than the physical injury itself.