Dueling thoughts on Blagojevich; how will they differ on Ill. Governor?

Call it one of the perks for people who enjoy the read of newspapers that compete with each other – we in Chicago now have rival thoughts for what should become of our state’s former governor who is half-way through serving a 14-year prison term.
The fate of Rod Blagojevich, whose case has worked its way through the appeal process all the way to the Supreme Court of the United States, is now in the hands of President Donald Trump – who implied earlier this week he’d be inclined to consider some form of clemency.


THE CHICAGO TRIBUNE – the newspaper that was so opposed to the concept of a “President Donald Trump” that they endorsed a Libertarian candidate for president – came out this week with an editorial stance saying (in essence) “Hell, No!”


They literally wrote in an editorial urging Trump to back off the issue, “We have…concluded that the sentence he earned not only is fair. It’s fair warning to other criminal pols in Illinois, the State of Corruption.”


Yet the Chicago Sun-Times, the newspaper that proclaims itself to be that of the workingman and was solidly behind Hillary Clinton’s unsuccessful presidential bid of 2016, came out with an editorial stance headlined, “Trump schemes aside, Blagojevich deserves shorter sentence.”


The newspaper that at one time called itself, “The Bright One” says that having Trump commute the Blagojevich sentence to time already served would essentially mean the one-time governor would have lost the past six-and-a-half years of his life to federal incarceration. 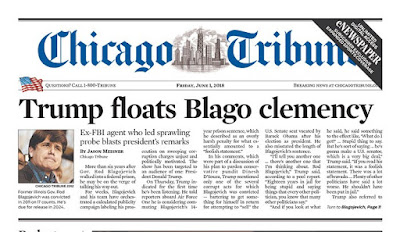 WHICH IT SAYS is fair in that it would mean Rod would have done about the same amount of prison time as former Gov. George Ryan got for his criminal convictions dating back to actions he committed as an Illinois secretary of state.


Each newspaper has managed to take an opposing stance on the same issue, which I’m sure is part of their efforts to differentiate themselves from each other – and from other newspapers in existence. 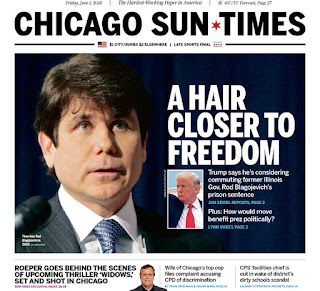 It’s part of what gives a publication its sense of personality, and what will be lost if those people all eager to dump the printed-on-paper word for ramblings published on the Internet (including this very weblog) wind up seeing their vision prevailing in the not-so-distant future.


And yes, it will stir up resentment among many. Since I don’t doubt there are people so unsympathetic to Rod Blagojevich that they want him to suffer – and don’t particularly care that the sentence he is now serving (scheduled for release sometime during 2024) might be a tad too long.


ALL I KNOW is that if the two remaining metro daily papers in Chicago can get this worked up over Blagojevich’s future, I’m anxious to see how they wind up weighing in on the upcoming gubernatorial elections coming Nov. 6.


Back during the primary, the Tribune was the paper that found its way to endorse Gov. Bruce Rauner in the Republican Party primary over Jeanne Ives, while picking Christopher Kennedy’s failed bid for governor over that of ultimate winner J.B. Pritzker.


Their editorials made it rather clear they didn’t think much of the idea of a “Governor Pritzker” and that they were buying into much of the line of logic that Rauner presents that he needs ideological allies to do what he wants (particularly on issues related to organized labor) if Illinois is to improve.


While the Sun-Times backed Pritzker’s primary bid in ways that made it clear they don’t have a problem with him being governor – particularly if it means that Rauner winds up out on his keister come Inauguration Day in January 2019.


HOW VOCIFEROUS WILL the editorial rhetoric become?


Will we have to make the editorial pages a “must-read” in coming months? Will we have to snicker at those people who insist on saying they “don’t read” editorials, because it shows they don’t know what they’re missing?


Will the biggest loss to our city’s local news scene on that future date when there are no more dueling newspapers be that we have a lone editorial voice pompously trying to tell us what to think?


Because by reading the editorials these days, it’s quite clear there’s only one thought overwhelmingly held by all of us – nobody (and I mean nobody) wants Rod Blagojevich back in any form of electoral office!