EXTRA: Would ‘Gov.’ Michael Corleone have been wasted authority?

Remember near the end of the film The Godfather when Marlon Brando’s Don Vito Corleone character told his son Michael (a.k.a., Al Pacino) that his regret in life was that he couldn’t fix things so that his son could be the political big shot giving orders? 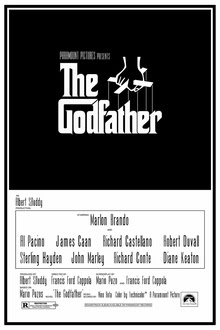 “I thought that when it was your time, that you would be the one to hold the strings; Senator Corleone, Governor Corleone. Something,” the Don said.


PERHAPS THAT’S THE reason why Gov. Bruce Rauner had enough interest in placing a bid two years ago when the private papers of author Mario Puzo were put up for auction.


It seems that Rauner won the auction, with what was reported at the time a $625,000 bid. To get possession of dozens of boxes of Puzo manuscripts – including the work on his 1969 novel “The Godfather” that became the inspiration of the 1972 film and its 1974 and 1990 sequels.


Rauner’s interest in all this was revealed recently by Dartmouth University. Rauner and first lady Diana are alumni, and it seems the papers are going to be stored in the Dartmouth Library’s special collections – which because of his past financial support, is named for Rauner himself.


Could it be that Rauner identifies with the story, as one where Vito Corleone wanted to use his influence to buy a political office for his son? Maybe that’s an inspiration for all the money he spent to “buy” the Illinois governor’s office for himself in the 2014 election cycle – and also spending much more on this year’s primary and general elections to try to keep the post.


THERE IS ONE part of this tale that particularly amuses me – the fact that he’d spend so much of his own money to buy these papers, along with an Olympia-brand typewriter that he may have actually used to write the Godfather manuscript.


It must be nice to have that much money to spend on such a luxury that includes a "may" and not an absolute. Although some news reports indicate that Rauner made the winning bid to Dartmouth one day after publicly talking of the need for Illinois universities to cut their spending.


It almost makes me wonder if I should take my own files of my 30-plus years in the news business and try to find a market for my own papers. I'll even throw in the laptop from which I publish the Chicago Argus -- which probably will be totally obsolete and useless.


The only problem is I suspect that when my time comes and I’m no longer of this particular realm of existence, my nephews and nieces most likely won’t hesitate to turn the paper pile into trash. Let’s hope they at least have the sense to dump it into a recycling bin.