I’m sure some people are going to respond to this commentary with a “So F---in’ What!” and claim we’re somehow better off that the Jazz Record Mart – located at various spots just north of downtown Chicago throughout its history – is no more.


All I have to say is that those people are cultural philistines – with a few choice obscenities placed in that label as well.


AS ONE WHO particularly enjoys jazz and blues music and was always disgusted at the selection of said recordings available at the typical suburban mall record shop or department store record department, I remember thinking that the Jazz Record Mart was a truly unique asset that made our city superior.


The kind of place that out-of-towners would (or should) make a point of checking out during their time in Chicago. It certainly would be more worthwhile than any time spent at Navy Pier buying tacky junk in their gift shops.


Or thinking there’s something culturally significant to eating at the pier’s Bubba Gump Shrimp restaurant.


But the Chicago Tribune reported that the store closed up shop on Monday. It seems the deal was finalized Monday morning, and at that moment had to close for good – leaving some would-be customers locked out and unable to make one final record buy.


I MADE MY own final trip to the store about one month ago, and I have to confess it was the first time I had been there in a couple of years – which is probably a good part of the reason why the store is no more.


Although its owners told the Tribune it is the growing rent rates for downtown Chicago real estate that made it too costly to keep doing business at its Illinois Street location.


On the day I went there, I have to confess to blowing about $100 – which is something I used to do a lot, but haven’t in quite a while. In part because my own record collection accumulated over the past four decades has grown quite comprehensive – particularly since I inherited the records my brother had collected prior to his passing away.


I’m still sorting through his vinyl assortment, which now gives me an absurd amount of recorded music for one to own.


BEFORE ANYONE STARTS telling me about the wonders of downloads, let me say I’m not buying it. Not only because I’m convinced that a clean, well-preserved piece of vinyl will give you better sound than anything involving digital recording.


But because I want the physical feel of the albums and their covers – and also enjoy the technology of a record turntable more than I ever could using my computer or an iPod (which I have never owned) to play recordings.


Besides, the idea that people came from around the nation to shop at Jazz Record Mart isn’t odd. The last time I was there, I had to wait in line behind a guy who plunked down something like $500 worth of recordings on his credit card.


He said he was from Houston, and made a point of visiting the store every time business brought him to Chicago, because there just wasn’t anything comparable in Houston. And to think, there are some fools who want to believe that Houston will surpass Chicago in any sense some day soon.


THE ONE THING I did notice when I was last at the store was that the stock included rock ‘n’ roll records along with their other stock. Which probably means it needed the additional revenue such stuff brought in, instead of relying on the sounds of Charlie Parker or Billie Holliday to keep alive.


Although it would seem that having the old Mick Jagger or Aerosmith records weren’t enough to generate the kind of money that let the store pay its rent at a downtown location.
I must confess to even buying one rock record, along with my other final purchases – Radio Gold, a compilation of songs that were big hits in Great Britain. Where else can I hear Frankie Lymon’s “I’m Not A Juvenile Delinquent” along with Frankie Laine’s take on the theme from “Rawhide.”


And if you tell me the “Rawhide” theme was done by Elwood Blues, I’m prepared to dismiss you as a truly clueless musical philistine. 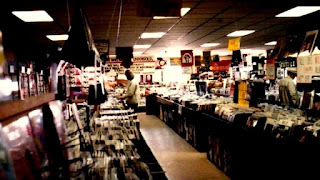 EDITOR’S NOTE: A Facebook-based tribute to Hegewisch Records, another comprehensive record shop that is no more where I spent far too much time and money during my youth. I suspect I'm going to become very acquainted with Beverly Records on the city's Southwest Side in coming years.
Posted by Gregory Tejeda at 6:13 PM