There have been moments during my years as a reporter-type person when someone who I was interviewing was saying something so ludicrous that what I really wanted to do was tell that person to be quiet.

As in quit making a fool of yourself by proposing something so ludicrous that it’s never going to happen – and whose only purpose is for you to think you can force me to write about you as though you are serious.

NOT EVEN THE idea of asking a lot of nit-picking questions and writing a story pointing out the nonsense of the idea being spouted truly works – because it implies that the original idea was worth being acknowledged.

Which is why it was a good thing that I wasn’t present earlier this week when Chicagoland Chamber of Commerce President Jerry Roper came up with his own idea – turning the Thompson Center state government building into the new casino that is so desired by many city officials (including Mayor Rahm Emanuel).

Roper is one of those people who doesn’t think much of the building, which he said is a “burden” to state government. He does make one legitimate point – that at three decades old-and-counting, the structure has reached the point where it will need major renovations to ensure it will continue to be an acceptable office building for state government’s Chicago offices for decades to come.

So Roper said he thinks the state should unload the building on a casino developer, and let them handle the cost of renovating the 16-story building while they convert it into a casino.

FIRST OFF, THE idea of a casino at Randolph and Clark, just to the north of City Hall/the County Building is so ridiculous just because of its proximity to government. It would be a bad joke waiting to be told to put it there.

Plus the fact that any casino is going to have to have its own parking facilities – even if it means some sort of exclusive parking garage.

Those facts alone ought to be enough to show how ludicrous the idea truly is. Although when I think about it some more, I also realize that Roper’s idea is ridiculous because that square-block cylinder in use by state government isn’t anywhere near enough to house a legitimate casino.

For as Roper said he envisions it, the casino would be in that basement level where people can currently devour all forms of fast food, and on the ground level entrance where all those nondescript  stores now exist.

ALL OF THE upper floors that now house state agency offices would be converted into hotel rooms.

With the idea being that people could walk out of their room onto the balcony, look down and watch for themselves all of the gambling taking place beneath them.

Maybe he’d envision turning the governor’s office into some sort of exclusive suite, with people saying the slept in the space where much illicit activity took place (even though Rod Blagojevich rarely set foot in this particular office).

By that kind of logic, the ninth floor room straight back from the elevator bank (which once was a press room where reporter-types at the building would congregate) would become some sort of no-frills, discount room for cheap people not willing to pay much of anything.

I MOCK THIS casino idea because it’s just too ridiculous.

That basement level just doesn’t offer enough floor space for all the hard-core gambling that would be essential to a Chicago casino (a lot of people are going to have to lose lots of money in order for the facility to generate the kind of gross income that could then be taxed by the city and the state).

There’d probably be enough space for slot machines, which means you’d have a casino filled with cheap people looking to throw away their quarters. There would be none of the more-prominent “games of chance” that would generate the gambling activity of the real “high rollers.”

But aside from these serious attempts to point out the flaws of converting the James R. Thompson Center (nee, State of Illinois Center), there is one issue that ought to show, in and of itself, how ridiculous the idea is.

WHAT WOULD YOU do with state government?

There may be vacancies in office buildings scattered throughout “the Loop.” But the idea that agencies would move willy-nilly all across downtown Chicago – one agency here and another there – is absurd.

About the only people who would want this are those who can’t handle the fact that for some state agencies, the Chicago office is more important than the one in the capital city of Springfield. Or those who think that government buildings are supposed to be marble monstrosities decorated with gargoyles and look like they came from the 19th Century. 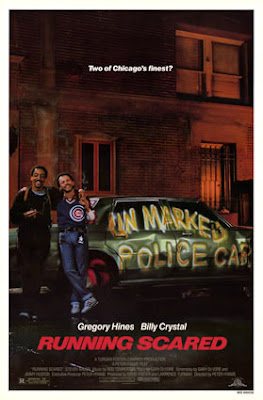 They come up with all kinds of crazy ideas to justify trying to shut down the Thompson Center as a government building (which was one of Blagojevich’s more ridiculous ideas – and one that we should be thankful it never went anywhere).

WHICH IS WHY I’m glad that Gov. Pat Quinn didn’t get sucked too deeply into responding to Roper’s casino proposal. Don’t dignify nonsense with a serious response.

Besides, I don’t know how seriously I could take as a casino a building that I once saw appear in the 1986 film “Running Scared.”

I don’t know what was more ludicrous – the idea of bags of “cocaine” splattering on the atrium floor? Or the sight of actor Billy Crystal supposedly being a fierce Chicago cop who goes around wearing a Cubs jersey?

EDITOR'S NOTE: I almost put this story in the same category -- the anonymous speculation that Rod Blagojevich could get Thirty years to Life in prison when he ultimately is sentenced. It is ridiculous to think it should be so long, unless you're the type of person who lets your political partisanship get the best of your common sense. If it does happen, we truly should be outraged.