A DAY IN THE LIFE (of Chicago): He sounds so naïve, Rahm does on taxes

A part of me wants to chuckle at Mayor Rahm Emanuel’s rhetoric about wanting to cut the city’s share of the sales tax.

He thinks he’s about to become a populist hero who slashed taxes to benefit the people by doing the exact opposite of Todd Stroger – who during his time as Cook County Board president actually raised the county’s share of the tax to help raise money to cover all the services they provide.

SOME PEOPLE ARE determined to never forgive Stroger for that move. It will dangle from around his neck forevermore and WILL BE his political legacy. So Emanuel thinks he can get the exact opposite legacy for suggesting that the city share of the sales tax be reduced by about 0.25 percent.

If his talk were that simple, perhaps it would work. Some people are so eager to hear the words “tax cut” that they don’t pay attention to the specifics. Which in this case would mean a lot more tax increases than decreases.

For Emanuel wants to alter the list of items and services that actually get taxed.

There are certain things that people actually pay less of a tax on, and a few others for which the sales tax does not apply. Take a look at your grocery receipt sometime to figure out the different items and what gets taxed at what rate. Just think of all the services that can now be taxed.

YOU JUST KNOW that cutting the overall sales tax rate (which is higher in Chicago than in other parts of the state) will be ignored if certain items now get taxed at a higher rate.
﻿
He’ll be Rahm the Tax-Hiker, rather than the mad Tax-Slasher. If he seriously goes forth with this rhetoric (the Chicago Sun-Times reported Wednesday that he’s likely to do so), he’s going to find out how quickly he becomes even more despised than Stroger among Chicago taxpayers.

There is one potential plus in this whole mess. This is an issue that ultimately has to be decided by the Illinois General Assembly. Emanuel can’t do this on his own. So will Illinois House Speaker Michael Madigan, D-Chicago, and state Senate President John Cullerton, D-Chicago, save Rahm from himself? Or will they give him what he wants, along with the rope to hang himself in the process?

What other items are of interest on the shores of the southwestern tip of Lake Michigan?

SOMEBODY NEEDS TO LEARN THE LESSONS OF HEIPLE: State Sen. Suzi Schmidt, R-Lake Villa, is new to the Legislature. So she doesn’t have the memory of watching then-Illinois Supreme Court Justice James Heiple have to explain why he thought he was exempt from speeding laws.
﻿

Heiple, as I recall from his testimony, responded to being pulled over by a traffic cop by flashing his court credentials, then got all huffy when the cop indicated he didn’t care that Heiple was a judge.

Schmidt now gives us a moment of arrogance to rival that, as the Lake County sheriff’s department this week made public the recordings of calls she made to 911, telling the police up front she was the former Lake County Board chairman, and that the police should ignore any calls for help that her husband might make. Perhaps Heiple and Schmidt would make the perfect couple when it comes to ego. Although I find it amusing that she identified herself by her old political post, rather than her current one. She figures nobody would care what a state senator thought?

Insofar as the actual contents of what are at least three calls the Lake County sheriff has had to respond to at the Schmidt residence since December, all I’ll say is that they remind me too much of an old Saturday Night Live sketch that parodied programs such as COPS – one in which police had to respond to a call at the governor’s mansion in Little Rock, Ark., because “Bill” just got beat up by spouse “Hillary” after she caught him messing around with other women. 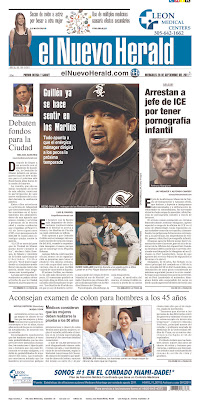 CHICAGO FOLLOWS OZZIE TO MIAMI???: Miami Marlins manager Ozzie Guillen already has people thinking they might like to be connected to the National League team because of his presence. What is shocking is how many of them are Chicago Cubs.

Reports indicate that hard-hitting infielder Aramis Ramirez and hot-tempered pitcher Carlos Zambrano might want to become Marlins. There even are reports that if Cubs manager Mike Quade does get dumped, he could wind up as one of Guillen’s coaches – because Ozzie admires the job he did with such an awful ballclub.

That could mean more Cubs following Guillen to Florida than family members, since wife Ibis and sons reportedly have said they want to stay in Chicago.

I just worry that bringing so many Cubs brings a funk to the Marlins. After all, the old ex-Cub Factor (first publicized by the late columnist Mike Royko) says that the presence of three or more ex-Cubs brings defeat in the World Series.