Cora out before he was ever “in”

The back-door dealing and mechanics that take place at City Hall or in other government operations have got nothing on the bizarre handling of things at U.S. Cellular Field these days. 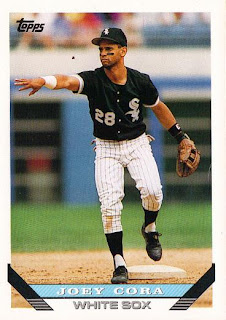 On the surface, the final outcome doesn’t seem too strange. Regardless of whether one agrees or disagrees, the idea that Ozzie Guillen is out as manager of the Chicago White Sox and that his buddy, Joey Cora, is out with him is something that should have been expected.

YET CORA LITERALLY becomes the guy who got fired as a major league manager before he won (or lost) a single game.

Guillen’s final game as field manager for the White Sox was their 4-3 victory Monday night over the Toronto Blue Jays. It was kept low-key, but team officials made it known that the final two games of the season to be played Tuesday night and Wednesday afternoon would see bench coach Cora in charge.

No, that doesn’t mean he was in line to get the job permanently. Only that he’d finish out the season before joining his long-time baseball buddy Guillen in unemployment for a brief period of time.

Yet Tuesday morning, Cora received a text message telling him not to even bother showing up at the ballpark. He was fired. Regardless of what you think of him as a coach (and Guillen confidante), you have to admit that is a cold way to handle the situation.

WHILE IT APPEARS that Guillen quit Monday before anyone could get around to taking his job away from him (forcing the issue to come to a head during a half-hour-long meeting between Ozzie and team Chairman Jerry Reinsdorf), Cora doesn’t get that same privilege.

My guess (and this is only an educated guess) is that someone was disappointed that they couldn’t tell Ozzie to “go away.” So they took it out on interim manager Cora – whose ties to Guillen are so strong that it is likely he would have quit to follow Ozzie to wherever he winds up managing – most likely with the newly-rebranded Miami Marlins (which is what the team SHOULD HAVE BEEN named when they were created nearly 20 seasons ago). 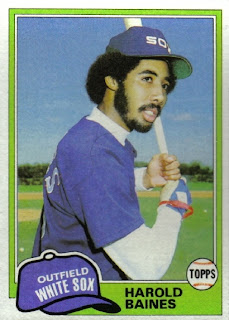 So Cora, who has managed in the U.S. minor leagues and for the La Guaira Tiburones of the Venezuelan League, won’t get his Major League Baseball managerial debut in what is left of the 2011 season.

He’ll have to wait for some future season – while he and Ozzie do what they can to try to revitalize a Marlins franchise whose claim to fame is winning two World Series titles even though they have never been able to finish a regular season in first place.

AS FOR THE White Sox, pitching coach Don Cooper gets to run the ballclub for those final two games – although reports from the ballclub indicate that first base coach (and ‘80s star hitter Harold Baines) will be at his side advising him.

Which seems to mean that they're the two who are still employed in Chicago. Both learned Tuesday that they're not fired. The rest of the coaches are replaceable.

Harold seems to benefit still from those days of the mid-1980s when a chant of "Harold, Harold" on the South Side could mean either Baines or Washington.

He is, after all, one of those great athletic stars who included three stints as a White Sox player during his two-decade-long career, and who has maintained his Chicago ties even though he is a Maryland native.

HOW COULD HAROLD go back to being just a guy whose picture is included on the outfield wall as one of the White Sox franchise immortals (retired Number 3)?

And I also can’t help but wonder about Guillen’s status with the franchise.

The bulk of his career as a ballplayer was with the White Sox and his stints on the American League All-Star team were as a representative of the South Side ballclub. When combined with the fact that he was the manager of the lone Chicago ballclub to win a World Series in nearly nine decades, it makes him one of those names that means much to team history.

I doubt it would happen tomorrow, or anytime in the upcoming year.

BUT PERHAPS WE ought to accept the fact that the day will come when Guillen’s face (and uniform number 13) will also go up on that outfield wall (even though, in team history, he’s only the third-best shortstop to come out of Venezuela). 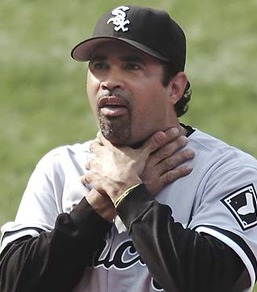 Maybe he’ll even get one of those statues someday that depict the top White Sox players throughout the years. Although it’s likely that a Guillen statue would depict him in some sort of managerial pose.

Let’s just hope it won’t be that one he assumed on that day in Cleveland at the end of the 2005 season when he started mocking the Indians mascot by choking his own neck.