Some people have an overly-bloated sense of their self-worth, particularly if they catch the political bug.


Yet even for the overgrown egos I have encountered amongst political people, Willie Wilson is an outstanding persona.


WILSON IS THE guy who decided to give the people of Chicago the chance to vote for him to be mayor back in the February elections.


One look at the continued presence of Rahm Emanuel at City Hall tells us that Wilson was unsuccessful – he came in third in a five-candidate field, taking only 10 percent of the vote.


Yet because Emanuel fell short of a majority of votes himself in that election, he had to go to a run-off in April against the number two candidate – Jesus Garcia.


It really was an Emanuel/Garcia campaign, with the other candidates getting mere fringe vote totals. Yet Wilson wants to think he personally caused the run-off election, even though he barely did better than former Alderman Robert Fioretti in that February election.


IT STRIKES ME as being as ridiculous as those who think that Bruce Rauner won over the people of Illinois in the 2014 gubernatorial election – rather than accepting there was a significant number of people who voted against Pat Quinn and he was the one who was lucky enough to have his name on the ballot as the challenging candidate.


In the same way that Rauner thinks he has a mandate to tell a Democrat supermajority General Assembly what to do, Wilson now thinks that 10 percent of the vote in an election cycle that had a fairly poor turnout now makes him fit to run for the highest office in the land.


President of these United States!!!


Wilson on Monday let it be known he’s going to be a candidate in the 2016 Democratic primary election. He’s going to take on former first lady and Secretary of State Hillary R. Clinton, Sen. Bernie Sanders of Vermont, former Maryland Gov. Martin O'Malley and anybody else who wants to succeed Barack Obama in office.


NOT THAT IT’S clear what his campaign would stand for. He tosses about the phrase “the people’s candidate” to describe himself. But insofar as details are concerned, he’s taken lessons from the Rauner campaign of last year – say as little as possible.


It helps to avoid saying something stupid by saying nothing at all.


The Wilson mayoral campaign was based on the notion that there would be a significant number of African-American voters who were so appalled at the thought of four more years of Rahm Emanuel that they’d vote for any black candidate – and Wilson was the most visual of the black candidates who ran in that election cycle.


In a federal election, that won’t matter as much. Somebody who can’t get votes outside of the African-American population isn’t about to win – particularly if there are no run-off elections to give him a second chance.


BESIDES, IT’S NOT like Wilson did all that well in that February election. He didn’t win a majority in a single ward – a majority of voters in those African-American leaning wards wound up preferring Emanuel, with Wilson finishing second.


Compared to Wilson being irrelevant elsewhere in Chicago. Which is what I suspect he will quickly become to the rest of the nation. He’s the equivalent of Lars “America First” Daly without the “Uncle Sam” suit. 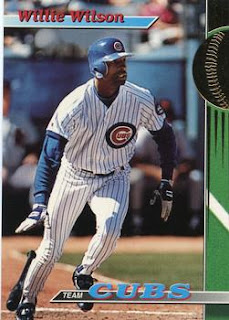 Of course, there always are fringe candidates who feel the need to put themselves on the ballot – or at least go out and campaign even if they can’t get their acts together enough to get a ballot spot. Which could wind up being Wilson’s fate.


Which means that after next year, it is most likely that the name “Willie Wilson” will revert back to the image it has created for many people – the one-time Kansas City Royals star outfielder who actually finished up his playing career as Sammy Sosa’s backup with the Chicago Cubs in 1993-94.