Will parade route alteration be a blessing in disguise for Hawks fans?

We’re likely to get more crummy weather on Thursday, which is what provoked city officials into altering the official celebration of the Chicago Blackhawks’ winning of a Stanley Cup championship – the team’s third in six years and only their sixth in their 89 years of existence.


The fact that the celebration is now confined to the roughly 60,000 people who can fit into Soldier Field rather than the 2 million or so who could fit into Grant Park and turn it into a muddy mess could leave many millions miffed at their inability to be a part of the celebration.


THAT IS WHAT caused city officials to decide to have a parade from the West Side leading to Michigan Avenue, before it then heads to the Near South Side and the Park District-owned stadium that the Chicago Bears treat as their own.


Specifically, the parade will start at Washington Street and Racine Avenue – about 10 blocks further west than originally intended.


It is meant to create more space for people to line up along a parade route and feel like they’re a part of the happenings because they’re not going to be able to get the “free” tickets to Soldier Field that are now being scalped for several hundred dollars apiece.


I actually wish it could have been extended further. Literally to that “Madhouse on Madison” we call the United Center, where the Blackhawks call home.


IT COULD HAVE created more of a feeling that the team is a part of Chicago, rather than just for people who can afford the pricey tickets (several hundred dollars apiece if you don’t want to sit in the upper reaches of the arena) to actually go to a game.


If anything, it would be similar to the celebration the Chicago White Sox had back in 2005 when they finally won a World Series title for the first time in 88 years.


That parade started at U.S. Cellular Field, passed through several South Side neighborhoods, then wound up downtown for the big rally.
As much as some people might want to think of the downtown conclusion as the big event, I most remember the sight of those open-air buses passing through Chinatown.


THE COMBINATION OF the Sox and the aura of the neighborhoods truly made for a unique celebration – certainly more memorable than the sight of drunken revelers screaming like banshees every time a Blackhawks player says something insipid (which, let’s be honest, is about 98 percent of any sports-related celebration).


Could we get something similar as the fans line up along Washington Street, Des Plaines Avenue and Monroe Street to cheer on their favorite Blackhawks?


Could that be more memorable than anything that winds up happening inside Soldier Field, and that most of us will wind up watching on television screens that officials plan to set up outside of the stadium.


So that we can pretend we were part of the festivities! Although let's hope that Gov. Bruce Rauner, who says he plans to attend, doesn't try to draw too much attention to himself -- or else he'll get such a negative reaction from fans who want nothing but Hawks that it will make the recent event in suburban Oak Forest where organized labor activists gave da Guv the middle finger seem downright pleasant by comparison.


ALTHOUGH IF YOU think about it, is watching the celebration on television all that fake? Most of us have probably never been to a hockey game. The Stanley Cup itself was an event we watched on television.


We matter more as television ratings points (about half of the Chicago television market was tuned to Game Six on Monday) than as attendance figures.


In fact, sports itself is something we view on monitors. I have known some people who consider themselves hard-core fans who admit they rarely, if ever, go to a game.


But Thursday could be an experience for the hard-core fan, unless the rainfall winds up being so intense that it causes an outbreak of illness come Friday from people who didn’t have enough sense to “listen to your mother” and wear a raincoat! 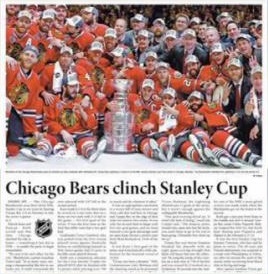 EDITOR’S NOTE: Many people are getting their giggles from the Korea Times headline that proclaims Chicago Bears win Stanley Cup. Did da Bears really start playing hockey at such an elite level as to win its championship? Or is there someone illiterate enough in U.S. sports culture to not know a football team from a hockey team? Personally, I wonder if it would make sense if it were known as the Staley Cup. Then we could claim the Bears won a trophy named for A.E. Staley – the Decatur, Ill., company that founded the team
Posted by Gregory Tejeda at 12:01 AM