What should we think of the fact that many people are stepping up the rhetoric these days following the shooting deaths of nine black people at a Charleston, S.C., church to dump the old Confederate battle flag?


There long have been those who argue the Southern cross flag of the Confederate armies is merely about “heritage,” the notion of a flag that depicts pride amongst those who grew up in that part of the region that once tried to break itself away from the United States.


BUT IT WAS pointed out that when South Carolina state officials last week had the flags at the Statehouse lowered to half-mast out of respect for the dead, the battle flag flying over a nearby Confederate soldier memorial still flew high and proud!


I have heard the official explanation that the flag was incapable of being lowered without someone physically climbing to the top of the flag pole and removing it by hand.


But I really wouldn’t have cared if a battle flag had also been lowered to half-mast. Its very presence some 150 years after the attempt at creating a new nation based on using state’s rights to justify slavery and segregation is what is offensive.


Which is why there are those who are hoping that South Carolina state Rep. Norman “Doug” Brannon, R-Spartanburg, is successful with his rhetoric that he will push for changes in state law to remove the battle flag from having a presence in the state that thinks it’s a point of pride that it provoked the Civil War.


NOT THAT I think it matters much. The kind of people with the racial hang-ups so intense that they’re willing to take up arms are going to keep that symbol no matter what anyone else says.
Take Dylann Roof, the barely-a-man who last week went into that black-oriented church and decided to kill a few people – but not all because he wanted witnesses as to his act of what he thinks is manliness (even though I wonder if that girlish haircut of his will make him a prime target in prison).

His Internet-published manifesto that has since been deleted included the photographs of himself waving Confederate battle flags and wearing a jacket depicting emblems of the apartheid-era South Africa and its neighboring nation of Rhodesia  (both of which tried to exist as white-only nations with European roots in portions of the planet where native Africans ought to have been the majority).

Now known as Zimbabwe to those of us who live in the real world.


THEN AGAIN, PEOPLE like Roof don’t live in our world. They live in their own world, and think the rest of us ought to have to live there with them. In a legally-mandated subservient position, of course.


﻿So it really doesn’t matter if the symbols get banned. The crackpots amongst us will still feel the same way. Their real punishment is that they’re forced to live in our world – where they amount to a batch of nobodies.


Heck, the swastika of Nazi-era Germany has been an illegal symbol in Deutschland since the end of World War II, yet those Germans who still fantasize about the resurrection of the “Third Reich” are able to get them symbols – usually made right here in the U.S.A.


Insofar as Confederate symbols, we have generations of southerners who were taught a take on the Civil War (the War for Southern Independence, the Second American Revolution, the War Against Northern Aggression, to name a few) that totally justifies the idea that continued use of the battle flag has nothing to do with showing hostility toward the idea of black people being people just like anybody else.


THAT’S NOT GOING to go away any time soon. Knuckleheads will be knuckleheads, no matter what!


If anything, we need a better education process so that people realize what the Southern Cross truly stands for. Because it will only be when people recognize for themselves how tacky a symbol it is that people will relegate it to the dustbin of history.


And how President Barack Obama’s suggestion of retiring the battle flag to a museum (just like the Smithsonian Institute has Ku Klux Klan robes on display as physical evidence of this nation’s racist past) could someday become a reality. 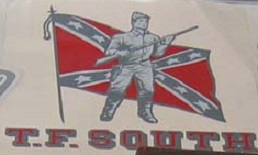 EDITOR’S NOTE: My own experience with the Confederate battle flag was spending one year attending a high school where the sports teams were “the Rebels” and the flag flew over the school’s football field – along with being painted onto the basketball court. I remember thinking of it as being a silly symbol; one that has since been retired. Of course, I later transferred to a high school where the symbol was a generic Indian chief (think the University of Illinois’ Chief Illiniwek without the pretentious talk of it being an “honored symbol”). I wonder at times which symbol was more ridiculous.
Posted by Gregory Tejeda at 12:01 AM