Yes, a part of me thinks that New York City municipal officials are being ridiculous for expending their precious time on trying to pass a ban on movie theaters selling those ridiculously-absurd sizes of extra large cups for soda pop.

You’d think Michael Bloomberg would have better things to focus on, and I suspect that is the motivation for many of the 51 percent of people who said in a recent poll that they oppose the mayor on this issue.

BUT I HAVE to confess, a part of me wishes that some Illinois-based official would push for a similar restriction.

Not because I believe that Bloomberg’s stated goal of improving the overall health of New Yorkers will be achieved by not letting them be capable of buying the obscenely-large cups that are sold.

But because I see it as a rebellion against every single snotty kid who works in a movie theater concessions stand and engages in an aggressive pitch to try to get me to buy the larger size because “it’s just a quarter (or 50 cents) more.”

I understand that the kid could care less what I buy, that he’s merely a minimum-wage worker, and that he’s following the instructions of his boss – the theater manager, who is pushing those larger sizes off onto people to bolster the bottom line of his particular theater.

WHICH LIKELY IS part of some large chain and that has some computer printouts available that judge the manager in question on how much pop and popcorn he can peddle.

Because I realize those $10 per person tickets for the actual admission to the theater don’t do anything for the profitability. The movie producers get the bulk of that money.

The theaters make their money off all the junk food they can sell you. 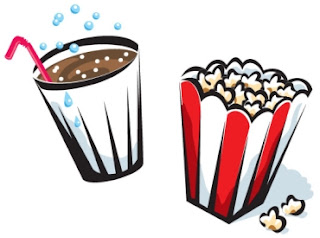 And to ensure that they can charge us prices that we would never pay in the real world (a.k.a., a Walgreen’s or a Jewel or perhaps a real candy story), they come up with those humongous sizes.

WE THINK THAT we’re getting our money’s worth when we pay something like $6 for a cup of soda because it’s somewhere around 48 ounces.

But who in their right mind is going to drink all of that in one sitting?

It’s either warm and/or flat by the end of the two hour-plus cinematic production. Or you actually managed to guzzle it all down, and you’re now thoroughly disgusting to everybody around you because you’re belching up a storm.

All that gas from having drank so much pop.

IT’S EVEN MORE disgusting than some of the films that are passed off as “horror flicks” but are really just collections of grotesque images strung together.

And if the only reason that exists for having such deformed sizes of pop cups in existence in movie theaters is to bolster a cineplex’ financial bottom line, that just isn’t good enough to me to justify it.

OF COURSE, I also have to admit that the main reason I don’t go to movie theaters regularly is because I can’t stand the crummy selection of films they show.

Just this week, my local theater (part of the Marcus chain) is showing Madagascar 3 and Prometheus on three screens each, along with Men in Black 3 and Show White & The Huntsmen on two screens each.

I suppose I should feel thankful that they have the Dark Shadows film restricted to one screen, and are not giving us that everywhere we look.

All in all, it reduces the number of films that actually get shown locally. I don’t like to have to make the long haul of a drive to see a worthy film that gets squeezed out of my local theater to enhance the “viewing opportunities” for certain dreck to be overplayed.

WHICH IS TO say that I think many of us are depriving ourselves of the chance to buy those perversely priced pop cups because we think the films themselves stink!

And we’ve certainly come a long way from the days when an animated hot dog, popcorn and pop danced across the screen, urging us “all (to) go to the lobby” to get ourselves a not-so-overpriced treat.

EDITOR'S NOTE: I sort of agree with one-time Illinois Statehouse news broadcaster and state Attorney General spokesman Abdul-Hakim Shabazz that this pop cup ban is a nonsensical issue that Mayor Bloomberg should not be wasting time on. So I'll sort of support his "Do nothing" candidacy for public office at a date yet to be determined. A non-endorsement for a non-candidacy.