The Illinois Republican Party is holding its convention Friday and Saturday in southwest suburban Tinley Park, hoping to get the party faithful together to get them all worked up about the prospects of voting on Election Day. 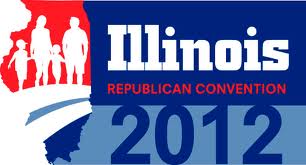 No, they’re not going to put Illinois into the Republican column of electors for the presidential campaign. But they’re hoping to inflict their share of damage on Democrats, and probably would consider it a major deal if they could keep Rep. Joe Walsh, R-Ill., from losing to Democratic challenger Tammy Duckworth.

NOT THAT WALSH himself is going to be anywhere near the Tinley Park Convention Center, the facility located just off Interstate 80 that party leaders brag they chose because of its easy access to downstate Illinois.

Why make rural Illinois Republicans have to drive for another hour or two through the Chicago area to get to a northwest suburban convention site?

Yet somehow, I suspect another reason they’re in Tinley Park (which admittedly has a nice convention facility) is because the Donald E. Stephens Convention Center in Rosemont (near O’Hare International Airport) is already taken.

For that is the site of the American Conservative Union convention being held Friday at the very same time that party functionaries are trying to get people all worked up to vote GOP!

WALSH IS AMONG the people who will be speaking at the union’s convention, along with Rep. Peter Roskam, R-Ill. (the Republican who beat Duckworth the last time she tried running for a seat in Congress).

Among others who were expected to have a presence at the gathering include the failed presidential hopefuls such as Herman Cain, Rick Santorum and Michele Bachmann – names which have some attraction to segments of the electorate.

For those people who want a Grand Old Party experience, it sounds like the real bash is taking place in Rosemont – while the Illinois party leaders are gathered in Tinley Park, less than a mile from the site of the Lane Bryant store where five people were killed some four years ago in a still-unsolved case.

UNLESS THE PROSPECT of a “surprise” birthday party for St. Louis-area congressional candidate (and failed Illinois 2010 lieutenant governor nominee) Jason Plummer held Thursday got you all excited, it seems like the people the party leaders want to appeal to have all chosen to show up at the other end of Cook County.

It certainly wouldn’t be the first time that events were scheduled in conflict with each other. In the public’s eye that often cares less about political concerns, I’m sure it was a bigger deal a few years ago when the Chicago White Sox scheduled their winter fan convention on the same day of the Super Bowl.

Still, it makes me wonder which party operative is responsible for deciding that this weekend was the one for Republicans to gather in the Chicago area.

We’re going to be seeing the split between the party regulars and the ideologues who these days get most worked up over the prospect of voting for Republican Party nominees – even if in many cases they’re really voting AGAINST Democratic challengers.

BECAUSE I’M SURE that group would eagerly have rebuffed the party officials if there had been any suggestion put forth that these two sides somehow work together.

So what’s my point in stating all of this?

It’s just that the American Conservative Union says in the statement that they’re gathering in Chicago on Friday to, “take the fight for the future of America directly to President Barack Obama’s backyard.”

Yet if we look to the president’s “backyard,” we get to see the split that harms the party’s chances of Election Day victory – which may well be the reason that Obama overcomes the concerns about a sluggish economy and wins Term Number Two come November.

The illinois Republican Party chose the dates and location before CPAC and they even met with the IRP and considered sharing the Tinley facility but chose Rosemont later. Check your facts before conjuring up your "anti conservative or conspiracy theories". I'm anonymous to avoid being attacked by usual conspiracy theorists in your publications!