Do protests do more than peeve people off? Do some deserve to be peeved?

Throughout the nearly three decades that I have been a reporter-type person, I have encountered many protest marches.
﻿
﻿They are cheap, easy stories to cover, and they give the impression that one is taking interest in an issue – even though from the news organization’s perspective, the most important “issue” is “How many people got arrested?”

IN FACT, A part of me has always wondered if protest marches accomplish little. They are usually a collection of people who are already converted to the cause, and rarely have I ever seen anyone whose views on the issue get swayed.

Many people who don’t care much either way wind up getting offended at what they see as an inconvenience – particularly if traffic gets blocked.

And those people who oppose the views of the protesters take great offense that anyone would speak out in opposition to themselves.

In short, they get ticked off.

THEN AGAIN, THERE are many instances where these people are pushing views that, in and of themselves, are offensive. Which makes me think that they deserve to be ticked off!

Perhaps the real purpose of a protest march isn’t so much to “convert” anyone (if they are, they’re about as effective as the Spanish Inquisition was at swaying Jewish people to Christianity). 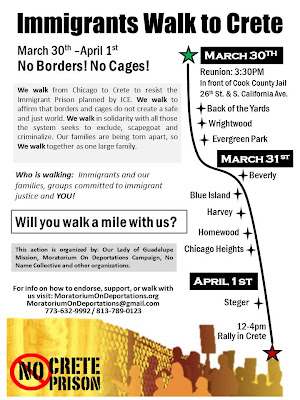 It’s about getting in the faces, so to speak, of the people who would rather ignore a problem.

So it is in that context that I couldn’t help but notice the two major protest marches that took place on Sunday in the Chicago-area. If there were other issues that aroused the passion of certain activists on Sunday, then so be it.

BECAUSE IN THE morning hours (when I’m sure many of the people who were opposed to this issue were in church saying prayers and acting sanctimonious), we had Chicagoans once again joining the masses (along with another group Saturday afternoon in suburban Naperville) across the nation in expressing disgust with what happened to Trayvon Martin in Sanford, Fla.

For those of you who are going out of your way to ignore this issue (a recent Pew study indicates that while black people are following this issue with great intensity, white people are much less intrigued by the matter), Martin is that teenager who got shot to death by a neighborhood-watch type who didn’t like his look hanging around the complex where he was “on duty.”

Some people (including my very own member of Congress) have tried to make an issue of the “hoodie” he was wearing at the time, while others have pointed out that his “weapon” turned out to be nothing more than a package of Skittles-brand candy. Although I think focusing on those images trivializes the moment.

Because the real issue at stake here is the idea that someone in an official capacity (even if you disregard the neighborhood-watch guy as a “cop wannabe” or a “rent-a-cop”) had so much discretion that he thinks he can justify the taking of a teenaged life.

AFTER ALL, THE man in question isn’t denying what happened. He wants to claim he was justified, and the local law enforcement officials (ie., the state’s attorney down there) is willing to go along with that line of logic.

It also is why I am astounded by the mindset of state Rep. Richard Morthland, R-Cordova, who is willing to push for the same legal standards used in Florida to try to justify the shooting death to be applied in Illinois. I’m hopeful that Illinois’ legislative leadership will stand its ground to the “Stand Your Ground” legal standard that we don’t need here.

But the fact that some are willing to talk like this is what ticks off activists enough to give up a Sunday morning to march (the Greater St. John Bible Church in the Humboldt Park neighborhood coordinated this effort) or a Saturday afternoon in suburban Naperville in hopes that they can arouse some anger.

Perhaps the fact that more people aren’t outraged is the real outrage that we ought to be protesting against. Yet that isn’t even the only offense being committed these days that has people angry enough to march.

TAKE IMMIGRATION REFORM. It has so many ways to upset people on all sides of the political spectrum.

That is why there were activists in the Little Village neighborhood who on Friday began a protest march headed south for suburban Crete. That community is where the Immigration and Customs Enforcement agency would like to see a detention center built to hold people facing violations of federal immigration law.

Those people wound up in Crete on Sunday, where they protested at the proposed site (which now is a farm field located near the Balmoral Race Course) along with local residents who hate the idea of a detention facility because, quite frankly, they don’t want anything quite so “icky” being built near their homes. Which the Illinois Senate seems to agree with -- they recently passed a bill that would outlaw detention centers anywhere in Illinois.

Reading the news accounts in recent days revealed moments where people watching the marchers insisted on shouting taunts. Those people like the idea of indefinite incarceration for people facing those immigration violations (which, by and large, are not felony offenses).

WHICH MAKES ME think that a protest that passed through such places as the Beverly neighborhood, along with suburban Blue Island and Chicago Heights en route to Crete, is offensive to the people whose sensibilities need to be bothered.

Because having the masses look the other way, all too often, is the reason why bad things can slip past us, unnoticed.