On way to Gov. Quinn, I respect Meeks’ civil union opposition. Even if he’s wrong

Unless Gov. Pat Quinn does a complete 180-degree flip, Illinois is on the verge of becoming the sixth state in this nation that allows gay couples the legal concept of a “civil union” officially recognized by the state.
﻿
﻿For just one day after the Illinois House of Representatives gave its approval to the concept, which would give a legal recognition to gay couple pairings and many of the same legal perks that a traditional married couple gets by saying “I do,” the state Senate also voted for the measure.

QUINN HAS ALREADY said he will sign it into law. So it is just a matter of time before the measure becomes law in Illinois – and all those people who last month voted for William Brady for governor will gnash their teeth in disgust.
Now some have made much out of the fact that the bulk of the support for this measure came from Democratic legislators; in the state Senate, only one Republican (state Sen./Treasurer-elect Dan Rutherford, R-Chenoa) backed the bill.
But the aspect that catches my attention is the vote of Rev./state Sen./mayoral hopeful James Meeks, D-Chicago. He voted “no,” which isn’t a shock to anyone who has paid attention to his legislative record – which reflects the beliefs of a conservative preacher who deep down thinks all those “homos” are “going to Hell” for their behavior.
It had been noted that Meeks was trying to use his political clout to get the Illinois House to kill the bill so that he’d never have to vote for it in the Senate. But that didn’t happen, which had some people speculating that he might very well vote “yes” for political reasons.
HE WON’T WANT to get the gay rights activists all worked up against his mayoral aspirations, according to that speculation.
But it all turned out to be a moot point. Meeks wound up having to cast a vote after all. And he stayed a “no.” 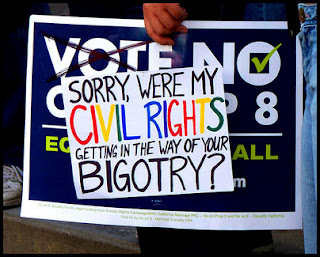 Just prior to the debate on Wednesday, Meeks said he wouldn’t change his stance because he figured there was nothing to gain. He figured people would dump all over his mayoral aspirations for casting a vote for political reasons, and would assume he wasn’t being sincere.
For all the times I have seen political people cast horrid votes to provide themselves with political cover (such as then-Sen. Barack Obama voting in favor of federal funding for construction of barricades along the U.S./Mexico border), it was nice to see someone stick by their beliefs and be willing to take a hit.
NOT THAT I admire Meeks’ vote itself. It is horrid. The only thing that keeps me from being totally appalled is the fact that I know he will pay for this come Election Day. If not on Feb. 22, then on April 5.
For Meeks has probably clinched the votes of every single member of his South Side-based church congregation, which numbers in the thousands. I’m sure those people will talk to their friends and get them to cast a ballot for Meeks.
But I think it ensures that Meeks gets the support of absolutely nobody else in his bid for mayor of Chicago. Which means his campaign is about to fall into the trap of people like Tim Evans and Danny Davis – who lost mayoral bids because no one outside of the African-American voter bloc took them seriously.
Considering that this mayoral election has several African-American candidates seeking to split the city’s black vote, he won’t even be that dominant. Could Carol Moseley-Braun’s campaign wind up being the big winner out of Meeks’ gaffe?
SO NOW WE’RE number six – right up there following Vermont, California, Connecticut, New Jersey and New Hampshire, along with the province of Quebec and the Federal District of Mexico (a.k.a., Mexico City).
Those few people who spoke out against civil unions during the two days of legislative debate (most lawmakers kept quiet and merely voted “no”) were correct when they said this was a significant change for the state – not that it is a bad change.
It is an acceptance of people by our state’s segment of society that is overdue. Considering that I still remember being on hand at the Statehouse back in 1996 when the then-GOP-dominated Legislature persisted with passing a bill that clarified that gay marriage is illegal in Illinois (a law that remains on our books), I’d say the actions of the past two days show a lack of mean-spiritedness on our Legislature’s part.
Perhaps the day comes when we will see that particular redundant law repealed.
SO WHEN PEOPLE like state Sen. Kyle McCarter, R-Lebanon, tries to claim that our state is being absurd by considering this issue at a time when there are budgetary problems to be dealt with, I can’t help but think he’s going to wind up looking like a short-sighted dink some five decades from now when people look back on this.
Even Meeks, I’m sure, will experience an epiphany someday and wish he could take this particular vote back.
-30-
Posted by Gregory Tejeda at 12:01 AM

admin :) i find you have really useful blog, its very good that you have decided to share it for others
i want to offer you swap links ! i have too network of twinks photo resources, here is some of them :
My Twink // Just Naked Boys // Sweet Muscle Boy
i know together we will get more visitors =)
- if you agree,write me please to @mail fire-bob@hotmail.com
thanks for attention!! byebye !