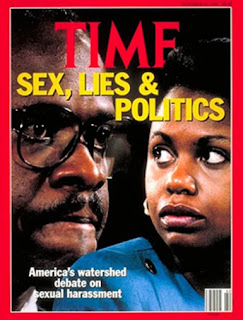 It is a sentiment I am all too familiar with from my time as a reporter-type person – filing some piece of copy because its subject matter ties into some “exclusive” story that my particular news shop is claiming. Who cares if the actual copy is not newsworthy, or perhaps even downright trivial?
That sentiment was clearly at work when the two major party candidates for U.S. Senate from Illinois engaged in a debate this week, and had to be subjected to one-time White House aide-turned-ABC reporter-type George Stephanopoulos asking both Alexi Giannoulias and Mark Kirk whether they thought Anita Hill owed an apology to Supreme Court Justice Clarence Thomas.
TO THEIR CREDIT, neither man fell into the trap of trying to dignify that trivial question with a legitimate answer. Heck, I would have been prepared to write a commentary urging people to vote against someone for dignifying it with a response.
Because this was purely about the fact that ABC News trying to hype up the fact that they’re claiming to have “broken” the story that Thomas’ wife, Virginia, during the weekend called up Hill’s office (she’s a professor at Brandeis University) and left a message asking for/demanding the apology.
If Stephanopoulos had been able to get either Kirk or Giannoulias to nibble at an answer (both men essentially said that the Thomas confirmation hearings were so distant in the past they weren’t going to think about them), ABC News would then have claimed that the U.S. Senate debate held in Chicago rose to national news.
Stephanopoulos, who was one of the moderators for that particular debate, would have gained praise from his bosses for getting them an audio/video snippet that would tie directly into their alleged exclusive, which would allow them to boast about themselves.
ALL OF WHICH ignores reality, which is that most people have long-ago moved on from this issue (and the ones who still have the hang-ups, including Virginia Thomas, need to be told to get over it).
As best as I can tell, most people who watched the debate and felt the need to post their reactions while the event was taking place were little more than bewildered about why Stephanopoulos would even bring that question up.
Even by the standards of a debate moderator trying to slip in an off-beat inquiry to try to catch the candidates in a moment of honesty, this one was just strange. It may very well be the most bizarre moment I have ever heard in the roughly two-plus decades that I have covered such debates related to Illinois political candidates.
Then again, perhaps that is all too appropriate, because the Thomas confirmation hearings were so memorably bizarre in their own right. If anything, they were a sign of what our electoral politics was destined to become during the past 18 years.
SOME PEOPLE REMEMBER where they were the day John F. Kennedy was shot, while others felt something emotional and unforgettable about where they were when they learned the World Trade Center collapsed nine years-and-one month ago.
I remember the exact moment when I heard the line about pubic hairs and Coca-Cola cans that Hill testified under oath came from Thomas’ mouth when she worked for him at the Equal Employment Opportunity Commission – I was sitting at a desk in the pressroom of what is now called the Thompson Center state government building.
It was early afternoon in Chicago and a radio was tuned to a station that was broadcasting the hearings live. Which means I got to hear the completely out-of-the-ordinary line at the moment she uttered it
It also means that I later heard live Thomas’ testimony on his own behalf, including the line about this being a “high-tech lynching.”
WHEN LOOKED AT from the perspective of today, where Republican partisans impeached one president of the Democratic persuasion and are insistent that the current chief executive is somehow “un-American” (while also trying to downplay the disaster that was the presidency of the GOPer who held the office in between the two), all of this is too predictable.
But back in the political days of “B.C.” (Before Clinton, who will be campaigning in Chicago next week on behalf of local Democratic Party candidates), this kind of reaction would have been the stuff of our worst nightmares. Surely we as civilized people knew better than to behave in such a manner?
Republican partisans are willing to look the other way at the personal peccadilloes of their people, so long as they spout the right ideological talk. When they are attacked, they go all-out to try to destroy their critics. And they are capable of holding a grudge.
The one thing I have to admire about this whole situation is Hill’s reaction to getting that call on her office voice-mail. She contacted campus police, who in turn notified the FBI. She’s not dignifying it with a pompous response.
NOW I’M NOT delusional enough to think that the “G-men” are about to haul Virginia Thomas off to jail while they build a criminal case of harassment against her. She did use a telephone, which could bring the whole concept of ‘wire fraud” into the mix. In the hands of an overly-anal prosecutor, this whole thing could become the crime of the century.
There’s just a part of me that would like to believe that Virginia now regrets making that phone call, in large part because the audio is now public – as though Hill is the one who has let this political wound fester for the past two decades.
I’d like to think she’s somewhat embarrassed by the ABC reports (which are getting picked up in way too many places).
If she’s not embarrassed, then she should be, more so than anybody else – except for George Stephanopoulos, who managed to taint the League of Women Voters’ debate between Kirk and Giannoulias with his ridiculous inquiry.
-30-
Posted by Gregory Tejeda at 12:01 AM