Better watch what we chuckle at

There are those people who got their laugh earlier this week from the glitch that caused the gubernatorial campaign of Republican William Brady to officially become a deadbeat, financially.

They paid a company to handle the  placement of their campaign ads on local television, then that company didn’t pay its bills on time. That means some television stations, including our very own WLS-TV, stopped airing Brady campaign spots until they got their money.
THIS MATTER LIKELY has been resolved by the time you read this. Even then, it didn’t mean that Brady was completely off the air, because we still had all those partisan groups that run the nastiest of campaign ads running their spots that take pot shots at Pat Quinn.
But like I just wrote, it is something to snicker about. How can somebody who can’t even keep track of their own advertising be expected to run state government? Since this isn’t about a campaign not having money to pay for the spots. It’s a clerical error.
I’m chuckling along with the rest of them.
But Brady campaign aides are right when they say it really isn’t the biggest of deals. I also wonder if everybody who took personal offense at this Brady moment is geared up for their own round of chuckling that could occur on Saturday.
I’M REFERRING TO the fact that President Barack Obama is planning one of the largest-scale “Get Out The Vote” rallies I have ever heard of.
The president will be in the Hyde Park neighborhood, specifically at the University of Chicago where he was once an instructor at the law school. To be more specific, he’s going to be on the Midway – that glorious strip of parkland along 59th Street that provides one of the most breathtaking stretches of outdoors-land on a college campus.
We’re talking about a strip that connects Washington to Jackson parks, and is about one mile long.
Now I don’t know at this point how the Obama people plan to stage this event. But I doubt they will come anywhere close to filling up the entire stretch of the Midway.
WHICH MEANS THAT we’re going to hear every half-wit conservative ideologue pundit going out of his way to denigrate the event by citing the large amount of open space – unless they seriously believe that the personality cult of Obama can bring in the thousands upon thousands of people it would take to fill that amount of space.
Be honest, if that many people were truly excited about the Democratic Party perspective in Tuesday’s elections, there wouldn’t be any need for a Get Out The Vote Rally, and all the polls would be reflecting the annihilation next week of the campaigns for Brady and U.S. Senate hopeful Mark Kirk – along with all the GOP candidates who are counting on that pair to coat-tail them to victory.
I’m going so far as to wonder how many people will try in a negative way to compare the crowd that comes out on Saturday for this Midway rally and compare it to the millions who were in Grant Park on Nov. 4, 2008 – the day that society celebrated and the ideologues stepped up a notch all their rhetoric about “taking back” our government.
There’s no way the weekend crowd will match that past crowd, which I’m sure someone is destined to use  as “evidence” that Obama has fizzled, even in his own home town. 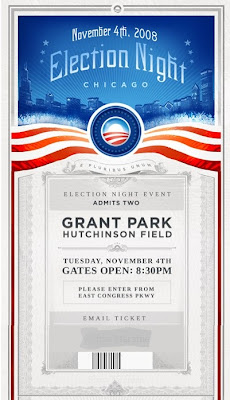 OF COURSE, SUCH talk will be ridiculous. But then again, all campaign rhetoric has a level of absurdity to it. Some of us like to try to forget that fact and pretend that only the other side is “full of beans” when it comes to political promises and attacks.
It will be curious to see how many people do show up at the Midway rally (best guesses say tens of thousands, which could still leave significant amounts of open space for the pundits to drool over), along with other Get Out the Vote rallies to be held with Obama this weekend in Philadelphia, Cleveland and Bridgeport (the one in Connecticut, not the one along 35th Street). Because Public Policy Polling came out with its own recent study of various states that tries to say how strong the turnout will be among various political partisans. Their results in Illinois?
Not one bit of increase among people supportive of Democrats during the past two months. Which is why we got former President Bill Clinton to come to town earlier this week for a rally at a downtown hotel, and are getting Obama’s second trip to Chicago in the past month.
Which means that for those people who do show up on Saturday at the Midway (if I were going, I’d seriously consider taking the Metra Electric commuter trains, which drop people off at 59th Street right at the Midway’s east end), it could be an amusing afternoon coming just before a dismal Election Day.
-30-
Posted by Gregory Tejeda at 12:01 AM