I went to an Early Voting Center on Monday to cast my ballot for the upcoming March 20 primaries and I almost made a gaffe. 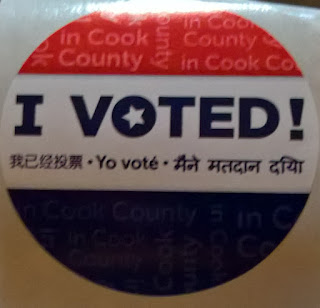 When I thought I had completed my ballot, I was informed that I managed to skip over one post – I somehow had left the position of Cook County Board president blank!


I WENT BACK and filled in the blank, making it for the record that I support the re-election of Toni Preckwinkle to a third term in the position. Even though her support of the pop tax last year was supposedly going to be the issue of outrage that would cause Chicago and the inner suburbs to revolt against her.


People were so worked up over the sweetened beverage tax that they were making significantly-inconvenient trips to Lake County (either the Illinois or Indiana versions) to buy their cases of pop and avoid paying the penny per ounce tax rate.


Perhaps it’s because the gubernatorial primaries of both major political parties have caused enough scandal and outrage that people are focusing their attention on those issues.


MAYBE THE OUTRAGE of the electorate is more focused these days on the re-election chances of Cook County Assessor Joe Berrios and trying to dump the political insider in favor of a governmental amateur. Or maybe it’s just because Preckwinkle’s opponent, former Chicago alderman Robert Fioretti, is one step above a fringe candidate like gubernatorial dreamer Robert Marshall.


But when was the last time you heard anyone rant or rage about the pop tax; except for maybe the political crackpot-types who are determined to complain about something no matter what happens.


Is our political attention-span that limited? Most likely!