EXTRA: Campaigning against Rauner, the first of many gubernatorial pot shots

Al Riley isn’t seeking re-election to the Illinois House of Representatives’ post he has held since 2007, and he really doesn’t have any competition for the township supervisor post he will continue to hold in south suburban Cook County. 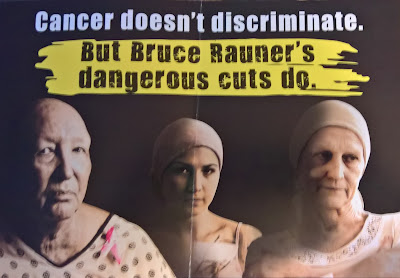 Yet that doesn’t mean Riley, of suburban Olympia Fields, isn’t actively on the campaign trail and doing his part to clog up mail boxes with political propaganda meant to influence the way people vote come the March 20 primary elections. 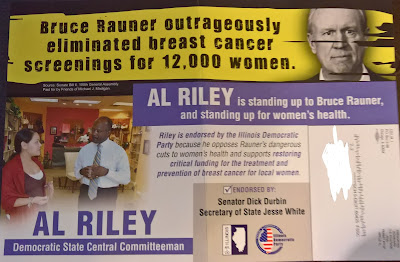 THE LEGISLATOR WHO will cease to be a member of the General Assembly come January of 2019 is sending out mailers that go straight on the attack against Gov. Bruce Rauner.


From the dreary-looking photographs of women with cancer and the headline advising us that Rauner’s budget cuts have harmed their health, to the simple, declarative statement saying that some 12,000 women no longer can get breast cancer screenings because of the governor, it seems that Riley wants to be a faithful Democrat.


Doing his part to ensure that Illinois isn’t subjected to “four more years” of “Gov. Rauner.”


I’m sure that many Democratic Party officials will be doing their part in coming weeks and months to take pot-shots at Rauner to undermine his chances of an Election Day success story.


WHICH MIGHT SEEM to some as though Rauner is being picked on from all sides.


Then again, he’s the $50 million-plus man with all the money to spend on himself and to try to buy allies in the General Assembly to undermine the efforts by Democratic legislative majorities that have been the only reason Rauner hasn’t run roughshod over their interests.


And is the guy who is capable of making possible Democratic gubernatorial nominee J.B. Pritzker seem like a pauper, by comparison!


So I’m sure this Riley shot is just the first of many we’re all going to see between now and Nov. 6. Which makes me wonder, where’s the Tylenol bottle? It’s all giving me a headache!