Thinking about William Daley’s dropping out of the Illinois gubernatorial campaign, I can’t fully buy into the reasoning he offered up.


He says that he never fully appreciated the difference between helping to run a campaign – and actually being the guy whose name was atop the ballot come Election Day.


YET THIS WAS also the guy who was one of the big-wigs of Al Gore’s 2000 presidential bid (and who some say was the force that dissuaded him from conceding defeat to George W. Bush on Election Night, instead getting him to go through a month-long legal appeal process that is the ONLY reason that election cycle was memorable).


Daley on Tuesday made a point of telling reporter-type people that was not afraid of losing to a man whom he then went out of his way to trash as beatable.


It seems as though Daley is accepting of the concept of a Republican candidate winning the 2014 election cycle for governor – and might actually encourage it.


Which makes me wonder if the ultimate Daley “punishment” would be for a Pat Quinn victory next November. I believe it is possible, because I believe this is not only an election cycle for the Republican candidate to lose, their candidates are more than capable of losing it big time.


AS FOR DALEY, it was interesting to learn that he says he will NEVER run for elective office in his life. We’ll see if he keeps that promise. He may have a change of heart in 2018.


Then again, Daley has always been the guy who talks about running for office, but then finding a reason to back away. This time, he just managed to hold off on dropping out awhile longer.


Maybe next time, he’ll make it to a primary election. Unless he really is true to his word that he’s just the kind of guy who takes appointed positions.


Although if you really look at his record, it isn’t that stellar.


HE’S THE GUY who, as Commerce secretary, is most remembered for fainting on the day that his nomination for the post was announced. As far as being White House chief of staff?


Let’s be honest. He’s going to be the “other” chief of staff President Barack Obama picked from Chicago. Even if you don’t want to buy into the stories emanating from Washington, D.C. about his ineptitude in the post, Rahm Emanuel’s stint as the boss over Obama’s staff will be the one people remember.


I suppose I shouldn’t knock down Daley too much. Perhaps he is just realizing that his role is to be the guy who supports the elected officials who have to take the blame for everything that goes wrong.


Daley – who made a point Tuesday of trashing Quinn for issues such as pension funding reform, Metra and Statehouse renovations – doesn’t seem to want to get blame for those issues, and many more if he were to get himself elected.


SO MAYBE IT’S better off that he’s out of the running for 2014. Nobody will get their hopes worked up by the thought of a “Daley” in the Executive Mansion. 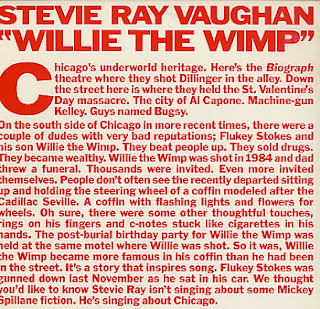 It actually has me thinking that we ought to start thinking of William Daley as “Willie the Wimp!”

Except that I’m sure the real “Wimp” (the son of black gangster Willie "Fluky" Stokes) would come crawling out of his grave (with the Cadillac-motif coffin, remember the song sung by Stevie Ray Vaughan?) and take great offense as to anyone comparing him in any way to someone like Daley – who seems to want a political world where he gets anointed to be governor.


Rather than one where he was in great danger of having the Democratic Party of Illinois (along with the Cook County Democratic Party and the Democratic County Chairman’s Association) all decide that no matter how little they think of Pat Quinn, they find him preferable to the “other” Daley brother.


EDITOR’S NOTE: I can’t say I’m surprised by William Daley’s actions. I was more shocked when Lisa Madigan decided that 2014 wasn’t “her year” to seek the top post in Illinois government.
Posted by Gregory Tejeda at 11:59 AM