Stuck in the past, is what Sox are

How depressing is the Chicago baseball scene going to be this season? 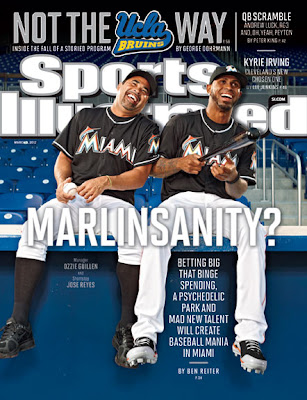 Ozzie Guillen, who due to his career as an All-Star shortstop and World Series-winning manager, is always going to be associated with the Chicago White Sox.

YET GUILLEN FINALLY makes the cover of Sports Illustrated for the first time in his athletic life – because of his new job as manager of the Miami Marlins. Seeing Guillen in that black uniform with rainbow-colored trim is about as odd as the pictures of Babe Ruth in the uniform of the Boston Braves (or Ron Santo with the Sox).

Yet it is more likely that Guillen will make it back to the World Series before either Chicago ballclub will (the truth is that they’re both so incredibly mediocre this season). The Cubs themselves will only be able to get so much optimism from having a new general manager before fans realize not much else has changed.

Meanwhile, White Sox fans are forced for this season to look to the past – specifically that World Series title of seven seasons ago that is the subject matter of that giant sign that jumps right out at you as you drive on the Dan Ryan Expressway by (or ride the commuter trains by) U.S. Cellular Field. Will we still be “enjoying” that sign sometime about the 2035 season?

First baseman Paul Konerko and catcher A.J. Pierzynski are the only two ballplayers left from that championship team. But it really is going to be a long season of mediocrity – made worse by the fact that the team’s fans literally have to hope for a “blast from the past” for there to be anything of interest happening on the playing field.

BY THAT, I mean the key to whether this ballclub has a long-shot chance of contending (as opposed to no chance) still lies in Adam Dunn -- who even though he motivated his "team" in an intra-squad game played Saturday is still a major question mark. 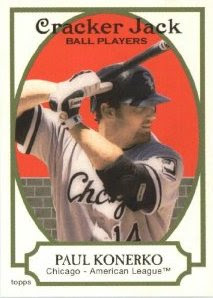 He’s the former National League slugger who for several years was averaging close to 40 home runs per season. But in his first year with the White Sox (as a big-money free agent) in 2011, he put in one of the worst seasons conceivable of a major league baseball player.

Dunn in 2011 was a weaker hitter than Guillen ever was as a ballplayer. And Dunn the ballplayer never had the defensive skills that Ozzie used to have.

For there to be anything interesting, Dunn will have to hit. The 2011 season has to become a complete aberration.

PERSONALLY, I WON’T be surprised if Dunn someday does rebound and become a solid baseball player (or at least a hitter with power) for some major league team. I’m just wondering if this whole thing is so psychological that such a rebound will never happen in Chicago!

I literally wonder if a trade (to a team that won’t give up much because of how bad he became last year) is the key to the Dunn rebound?  Put him on a “loser,” and maybe he’ll once again become a winner!

Which would make the Dunn saga so typical of Chicago baseball. The White Sox will wind up being the team that pays him significant millions of dollars to play baseball, while some other team gets the benefits of a hitter who helps them win some games.

Or at the very least look a little bit entertaining on the playing field – because the truth is that the other ball clubs that Dunn hit well for (the Cincinnati Reds and Washington Nationals) really were do-nothing teams that didn’t expect to win anything resembling a league championship.

THEN AGAIN, MAYBE with the pressure being off and nobody expecting Dunn to pair up with Konerko at-bat to lead the White Sox’ hitting, Dunn will start hitting again. Now that it no longer matters much. This may be the part of things that some baseball fans have a hard time understanding. But the people who “work” in Major League Baseball realize that a season isn’t a complete loss without a World Series title at season’s end. 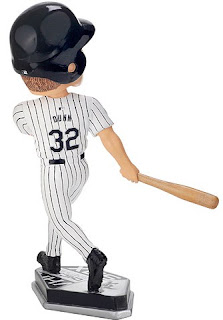 Konerko, himself, said as such, claiming that 2012 would still mean something if some young ballplayers developed their skills a little further – increasing the chance of “winning” something in 2014 or ’15. Although Pierzynski came in later and said that such an attitude does not amount to surrender for ’12.

But who’s to say what will really happen this season – other than the fact that some of us will have an extra eye, so to speak, focused on Miami to see whether the Guillen chapter of Marlins history turns out to be the least bit significant. Only one month until it becomes reality.

Because I suspect there are many fans here who (as their favorite ballclub begins its spring training play on Monday with a game against the Los Angeles Dodgers) only want to watch Dunn from his backside – with the doorknob hitting him in the buttocks on his way out of U.S. Cellular Field for good.