Republicans battling it out in 1 ward 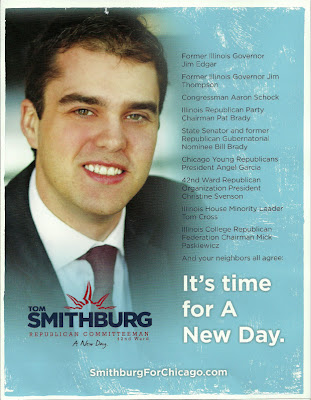 We’ve had Republicans swarming in and out of our state all through the weekend, yet I couldn’t help but notice they’re staying out of Chicago proper.

They even didn’t show their faces on Saturday at the event that usually attracts political people – the St. Patrick’s Day parade on Columbus Drive. Considering that I recall President George W. Bush marching with “Hizzoner, Jr.” in the parade a few years ago, it’s not like the concept of a GOPer in the event is so alien.

YET IT IS just testament to how overwhelmingly irrelevant the Republican Party has become in Illinois. The GOP starts off each election down by however many votes come out of Chicago.

In fact, I know one Republican-leaning person (he’s been both a political operative and publisher of ideological newspapers and magazines) who is convinced that the one-time Party of Lincoln will be irrelevant in the Land of Lincoln until the day comes that there is something resembling a significant Republican organization in Chicago proper,

So it is with that thought in mind that I have been reading the various reports that have been coming out in recent weeks about how Republicans are taking seriously a campaign for Republican committeeman for Chicago’s 42nd Ward.

FORMER GOV. JIM Edgar may not have liked the gubernatorial campaign of William Brady, but the two men both agree that they want Tom Smithburg to be the ward’s committeeman within the political party structure. 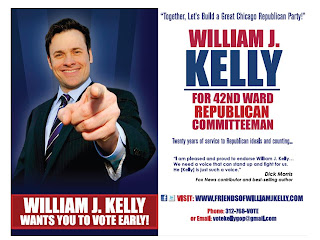 You’d think, getting that many big names and current titles that Smithburg were running for a statewide political post – instead of being the official Republican leader for his ward.

MAYBE THIS IS “Step One” toward the real resurgence of the Republican Party (instead of being the political party for rural Illinois that gets overwhelmed by Chicago and its suburbs on Election Day).

At the very least, it is an interest in the city.

Of course, what makes this particular post interesting is that there is a contested race for Tuesday.

The current committeeman for the 42nd ward (which consists of downtown Chicago and the near North Side) is Eloise Gerson. She’s had the position for awhile (mostly because no one else has expressed interest in it), and there are some people who claim she is not the nicest of people to deal with.

THEN AGAIN, NEITHER am I.

But the critics also say she is part of the “problem” in that she can’t put together an organization capable of turning out voters on Election Day.

Yet there also is a third candidate, and it is seeming that this particular election will be about a choice between Smithburg and William Kelly. Smithburg is the son of a former Quaker Oats CEO who has been part of Republican “big money” efforts in recent years, while Kelly is a political operative who has been willing to do the “dirty work” of campaigns.

As Smithburg has told us in his campaign fliers, Kelly was the person who caused a mini-controversy by pretending to be a reporter-type person to get access to then-mayoral candidate Rahm Emanuel and ask him more harassing-than-usual questions.

SMITHBURG ALSO CLAIMS Kelly is really a Democrat – having voted that way “at least 5 times.” Although Kelly has said in his own defense (in the Republican News Watch website) that he was voting for Richard M. Daley to be mayor – since the GOP has not put up a credible (Ray Wardingley does not count) candidate in a long, long time.

With rhetoric this nasty, you’d think this was for something more than just being the head Republican in downtown Chicago.
﻿
But it is the downtown location that makes Republicans seem to want to use this as their starting point for rebuilding relevance. Which has among its residents the kind of monied people who’d be inclined to want to be with the Republican Party, winds up going knee-jerk Democrat each election cycle – just like the rest of the city.
﻿﻿
Yet that ward, according to Republicans, provided the presidential campaign of John McCain with 10,125 votes in 2008. Which means there were just over 10,000 people within walking distance of Grant Park who specifically voted against the Obama phenomenon that culminated that night with his historic moment.

TAKE INTO ACCOUNT there are rural counties that don’t even have 10,000 people living in them. Chicago has so many people that it could still provide significant numbers of votes for an opposition party. With hard work and a serious commitment, it could be built upon.

Which is why we have so many Republican big-wigs (even though many of them are former something-or-others) getting involved in this committeeman’s race.

Take this one high-profile ward with a serious political structure, and maybe more wards would follow. It’s not like the Republican Party is going to win any elections in Chicago in the near future. But it would cut into the vote margin if the GOP weren’t quite so irrelevant in the Second City.