﻿﻿﻿﻿When I hear the new Republican majority of the House of Representatives go on and on about how it will repeal the healthcare reform measure that is a significant part of President Barack Obama’s legacy, I wonder how short-sighted they truly are.
﻿﻿
﻿﻿Not that I expect the healthcare reform measure that was meant to provide some sort of medical coverage to many of the 47 million people in our country who currently go without. The Senate remains Democrat-controlled.

SO EVEN IF the GOP uses its majority in a purely partisan vote to “approve” a repeal or significant overhaul of the law that would gut its intentions, it is very unlikely to get through the full Congress.
Even if for some reason Senate Majority Leader Harry Reid, D-Nev., were to see some political advantage to letting something pass, Obama himself would use his “veto” power to kill it off. And nobody these days has a veto-proof majority to override the president.
So healthcare reform (or if you insist on using the nit-wit term, Obamacare) isn’t going anywhere during the next two years. Any rhetoric we hear about the issue (and we’re going to hear a ton of such talk) is about pure partisan politics – all geared toward the notion that Obama himself should be a one-term president.
Excuse me for thinking that these newly-elected officials who got sent to Congress by voters spewing Tea Party-type rhetoric are so uncompromising and so strong-arm in their approach to government that I fully expect they’re going to handle this thing in such a manner that will turn off the true majority of our nation.
MAYBE IT’S BECAUSE I still remember the budgetary negotiations for the federal government’s 1996-97 fiscal year. It was just months earlier that the GOP had taken a majority in both the House and Senate, and under the leadership of now-former House Speaker Newt Gingrich, R-Ga., was determined to implement their own partisan version (the “Contract with America”) of what federal government should be.
That is what inspired them to take a hard-line toward budgetary negotiations and refuse to compromise even slightly. So when the deadlines passed and the federal government was forced to shut down all non-essential operations until a budget was in place, GOP officials figured that then-President Bill Clinton would be blamed. 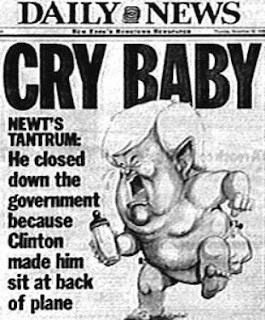 After all, everything was Clinton’s fault. Just as now everything that goes wrong with the government must be because of Barack Obama.
A national populace that had been inclined to listen sympathetically to the Gingrich rhetoric was so turned off by what it heard and saw in this case that Clinton wound up gaining the moral high ground. It was the beginning of the process by which Clinton cruised toward re-election the following year.
IS THAT WHAT could happen if GOP types start going overboard with all their talk of dumping healthcare reform, and anything else they think can be tied to the idea of an Obama administration being wasteful?
Let’s not forget that 47 million figure – as in the number of people who don’t have any kind of healthcare coverage, and whose reliance on hospital emergency rooms for routine treatment is a major financial burden on the medical system.
If they’re not careful, they risk being the people who are willing to leave a significant number of people with nothing. Similar to another report I read Tuesday in which the governor-elect of Wisconsin (a Republican who went overboard on the government waste rhetoric during his campaign) is insisting he does not want a high-speed railroad line developed in his state between Milwaukee and the state capital in Wisconsin.
He’s going to claim he’s saving the federal government money by avoiding lengthy studies to develop the kind of inter-city railroad system that is necessary if we’re ever to get people back onto trains for their travel.
WHAT REALLY COULD happen is that all the surrounding states could wind up taking Wisconsin’s share of the federal funds for the project, and Wisconsin gets left behind its Great Lakes states. Illinois officials already are saying they’ll take Wisconsin’s money and put it to use on improving the railroad line between Chicago and St. Louis.
Could Scott Walker’s stand on high-speed rail wind up helping Illinois to develop further ahead of Wisconsin? Could the resulting loss of jobs for Wisconsin because of not having a piece of the high-speed rail project wind up coming back to hurt the GOP electorally in 2012?
I couldn’t help but notice an MSNBC analysis of the Electoral College Tuesday morning that figured both Obama and any Republican candidate already have in excess of 200 electoral votes, and that there are only eight states that truly are up for grabs by either candidate.
One of those states was Wisconsin. Could these “principled” stands wind up offending enough people that Obama winds up following in Clinton’s footsteps in terms of re-election?
ANYTHING IS POSSIBLE. Because I couldn’t help but notice the Gallup Organization, which came out with a new study this week that says Obama’s popularity is on the rise in recent days – which is surprising to them because they would have expected such overwhelming losses in last week’s elections to cost him a few points.
But Obama went from a 43 percent favorable rating on Election Day to being up to 47 percent now (with the number of people who disapprove of his performance dropping to 46 percent).
It’s not a great performance rating. But it certainly could be worse, particularly compared to the studies prior to the election that showed the favorable rating for Congress ranging around 22 percent.
Which means those GOP partisans who want to think the whole country hates Barack Obama had best consider that people were always more disgusted with Congress than with the president. If they try to overstep their political play, they could find that the essential equation remains – and that they will be the ones who get dumped in Election ’12, rather than the president.
-30-
Posted by Gregory Tejeda at 12:01 AM

All the GOP has to do educate the public on ObamaCare. Over 150 new government agencies, doctors already retiring early, hospitals closing, rationing of health care - especially for the elderly, companies buying up individual practices for profit (that means less health care) . . . The list is endless and destructive to the best health care system in the world. Where will the Canadians got now?

By 2012, The National Popular Vote bill could guarantee the Presidency to the candidate who receives the most popular votes in all 50 states (and DC).

Every vote, everywhere would be equal and counted for and directly assist the candidate for whom it was cast. Candidates would need to care about voters across the nation, not just undecided voters in a handful of swing states.

Now 2/3rds of the states and voters are ignored — 19 of the 22 smallest and medium-small states, and big states like California, Georgia, New York, and Texas. The current winner-take-all laws (i.e., awarding all of a state’s electoral votes to the candidate who receives the most popular votes in each state) used by 48 of the 50 states, and not mentioned, much less endorsed, in the Constitution, ensure that the candidates do not reach out to all of the states and their voters. Candidates have no reason to poll, visit, advertise, organize, campaign, or care about the voter concerns in the dozens of states where they are safely ahead or hopelessly behind. Voter turnout in the “battleground” states has been 67%, while turnout in the “spectator” states was 61%. Policies important to the citizens of ‘flyover’ states are not as highly prioritized as policies important to ‘battleground’ states when it comes to governing.

The bill would take effect only when enacted, in identical form, by states possessing a majority of the electoral votes–that is, enough electoral votes to elect a President (270 of 538). When the bill comes into effect, all the electoral votes from those states would be awarded to the presidential candidate who receives the most popular votes in all 50 states (and DC).

The bill uses the power given to each state by the Founding Fathers in the Constitution to change how they award their electoral votes for president. Historically, virtually all of the major changes in the method of electing the President, including ending the requirement that only men who owned substantial property could vote and 48 current state-by-state winner-take-all laws, have come about by state legislative action.

The bill has been endorsed or voted for by 1,922 state legislators (in 50 states) who have sponsored and/or cast recorded votes in favor of the bill.

In Gallup polls since 1944, only about 20% of the public has supported the current system of awarding all of a state’s electoral votes to the presidential candidate who receives the most votes in each separate state (with about 70% opposed and about 10% undecided). Support for a national popular vote is strong in virtually every state, partisan, and demographic group surveyed in recent polls.