﻿﻿﻿That is what I have felt for the past few days whenever the thought of “elections” pops into my head.

﻿﻿
﻿﻿BUT UNLIKE ELECTION cycles of years past where the arrival of Election Day created a sensation of joy because, win or lose, the agony of campaigning would be over in 24 more hours, we’re not going to get that this year.
That is the real drawback to the fact that the campaigning for the 2011 municipal elections has already begun. In fact, I don’t doubt that there are some people who are overjoyed that Tuesday has finally arrived, because to them it means in just a few more hours, this mini-election cycle will be over, and we can move on to campaigning for the IMPORTANT political posts – such as Chicago mayor, along with city clerk, treasurer and all 50 aldermen.
So come Wednesday, what little inhibition Rahm Emanuel may have felt will come undone. He will be able to start campaigning out in the open. His opponents also will be able to start pushing people to cough up campaign cash in hopes that they can be competitive with Rahm, although I’m starting to wonder if Emanuel is destined to face little more than token opposition (with many of the competitive possibilities having decided they’d rather not take him on).
Yet trying to speculate about municipal campaign activity (such as whether severe Democratic losses Tuesday night makes Illinois Attorney General Lisa Madigan the most powerful young pol in the state) gives me a headache.
I WANT A time period in which we can forget about the idea of people running for political office, instead of immediately hopping into municipal election mode to make the late-November deadline for filing those nominating petitions to get on the ballot for the February 2011 election (with a runoff election in early April, if warranted).
﻿﻿﻿We’re not going to get it this year.

We’re not going to get a break until early May when a new mayor is sworn in. Then, we will get countless speculation about the potential for a mayoral/gubernatorial feud – particularly if we really do get William Brady of Bloomington (whose strongest backers are people who want anyone willing to be hostile toward Chicago-area interests) as governor as a result of Tuesday’s elections.
Although I wonder if we’d even get some feudin’ with a full four-year term of Gov. Pat Quinn, who might start to feel some wild oats that a future Chicago mayor would feel the need to smack down.
THESE TWO ELECTION cycles have managed to blend themselves into one political entity that most likely is a very unhealthy creature. The fact that the initial state government election cycle has become such a hostile one only makes me all the more weary when thinking of city government elections.
This is a place where one of our candidates for a Cook County Board seat is facing criminal charges for claims that he was vandalizing his opponent’s signs (which is an act I’d like to think is beneath a political official), and is now suing the police department that has the unmitigated gall to arrest him.
If that isn’t tacky enough behavior, I couldn’t help but be offended by the reports coming from the one-time elite WLS-AM radio, which claims that Quinn is playing the “terrorist” card because he spouted a lame quote that was trying to say that we’re better than our critics in the world because we have free and open elections.
I have a problem with anyone who seriously has a problem with that idea.
ALTHOUGH I SHOULD be honest enough to admit that not all of the tacky rhetoric is coming from Republican partisans. While writing this commentary, I just heard one of those “Who is this guy?” advertisements that Quinn has been running about Brady. 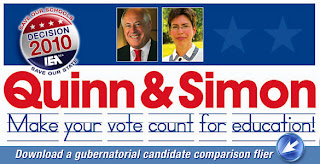 This one came right out and said that Brady was supportive of giving firearms to people who beat up on their spouses. Ouch! It makes me think that the concept of political desperation is one that truly is bipartisan in the 2010 election cycle.
Insofar as Tuesday’s elections are concerned, I am aware of the people who are trying to predict this to be a big year that enables Republicans in Illinois to regain significance within state government. It could happen. Then again, the GOP has been so irrelevant in recent years that anything would be an increase. 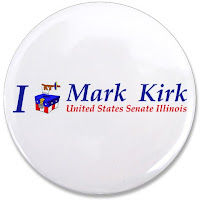 Political observers are coming up with their own theories for trying to measure how intense the GOP partisanship is.
PERSONALLY, I’M GOING to do so by paying attention to the results for state attorney general and Illinois secretary of state.
Those are the two campaigns where nameless GOP candidates are running against the “elite” of the Democratic ticket. Not even the hardest-core Republican activists think that either Steven Kim or Robert Enriquez are going to win, even though they’re going to be on a slate of candidates in an election year that will draw many knee-jerk GOP partisans.
My point being that if either of those two men can manage to get significant numbers of votes to produce a competitive tally, then perhaps there is something to the idea that the GOP is on the resurgence.
Otherwise, I’m going to be too inclined to view this year’s results as a moment of stupidity by our state’s electorate that will be undone in 2014, before moving on to focusing attention on whatever cheap tactics Emanuel might use to try to persuade Lisa Madigan that she’s better off remaining as Illinois attorney general – rather than giving him a run for winning the position of “the Man on Five.”
-30-
Posted by Gregory Tejeda at 12:01 AM