If one thinks back a decade-and-a-half ago, the name “Bob Kustra” was prominent because of his proximity to the Illinois governor (whose health wasn’t always the best) and how close he came to becoming U.S. senator from Illinois.
﻿
﻿Which is why I find humor in the fact that when Kustra has now reached his moment of national prominence, it is for something as trivial as college football.

KUSTRA, AFTER FIGURING out following the 1996 election cycle that his days as an Illinois politico (a one-time legislator from Park Ridge, along with lieutenant governor under Jim Edgar) were over, got himself into the world of academia.
He left Illinois to head a college in Kentucky, and has since moved on to Idaho – where these days he carries the title of president of Boise State University.
Which is why Kustra took it personally when Ohio State University President Gordon Gee said recently that Division I universities with smaller-scale football programs don’t deserve to be considered for the Bowl Championship Series – that convoluted setup by which college football tries to pick a national champion each season.
Gee actually singled out both Boise State and Texas Christian University – both of which have gone undefeated this season, but Gee claims are unworthy because they allegedly play schedules filled with weaker teams.
I SAY “ALLEGEDLY” because even the schools of the major athletic conferences, such as the Big Ten, always manage to put a few of the same smaller schools on their schedule. Or does somebody out there really believe that Eastern Michigan and Ohio universities on the Ohio State schedule are really that much better than Wyoming or San Jose State on the Boise State schedule?
﻿
﻿So when Gee said that Boise State is playing teams from places like, “the Little Sisters of the Poor,” we got to hear Kustra respond in kind that perhaps Ohio State is playing, “the Little Brothers of the Poor.” Being willing to take on the big powers of college football and academia isn't the fate we in Illinois would have expected for Kustra.

This outburst comes from the man whom, when the Illinois GOP was at its peak in the mid-1990s, the party regulars wanted to send off to Washington to take over the seat the Paul Simon abandoned when he retired in 1996.
Of course, that seat wound up being filled by Richard Durbin, who defeated the guy who beat Bob Kustra in the GOP primary – the now-barely remembered Al Salvi. Kustra in that campaign came off as too meek and timid to appease the more conservative elements of the Illinois GOP.
WHICH IS WHAT started the trail of academia that put Kustra in the position to be capable of defending the smaller-scale colleges whose athletic programs still pretend to exist to bolster the reputation of their respective universities, rather than to exist on their own merits.
I’ll be the first to admit that my bias when it comes to college athletics is to find more interest in the smaller schools, largely because I went to a university whose athletic programs were Division III. The whole idea of dredging up young bodies to use them for a season or two on behalf of the sports teams just seems too alien to me.
I knew people in college who took their sports very seriously, but were also in school because they wanted to be there.
Now I’m not necessarily claiming that Boise State has some high-minded, idealistic football program. But I can see where their fans would come off thinking that it is ridiculous to look down on them.
AND THE FACT that this year, the Boise State Broncos have managed to go through their season thus far undefeated ought to make them worthy of some consideration for the top bowl games. It is, after all, supposed to be about Division I sports. It’s not like Boise State is a community college program (which can offer some quality play, but exist in their own athletic universe). 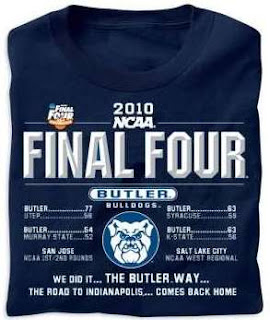 Anybody who tries to argue that Boise State would somehow cheapen, or taint in some way, the bowl game is being ridiculous. I can’t help but remember how much interest was created last season in college basketball when Butler University of Indianapolis managed to make it all the way to the championship game of the NCAA tournament. Are some people too blind to realize that Boise State could become the equivalent story for college football?
So when Boise State travels to Reno, Nev., on Friday to play Nevada, then takes on Utah State come Dec. 4, I’ll have to be the first to admit I probably will be rooting for them to win.
An undefeated Boise State would complicate the mix by which the NCAA tries to figure out which college football programs deserve to be in the top bowl game. If by chance the powers-that-be of college football try to keep out the smaller schools, we now know that Kustra will be more than capable of raising a stink that will be entertaining to listen to.
-30-
Posted by Gregory Tejeda at 12:01 AM

Some of my football-crazed friends disagree, but I believe (as you do) that putting a Boise State or a TCU in the National Championship game (or even both, should Oregon and Auburn both lose) would be a boon for the sport. You could say, "Cinderella has come in her glass slippers to kick some butt." It would be worth it just for the novelty factor, but would be one darned good football game because both teams would arrive with chips on their shoulders. I'm not prejudiced about this (and I will disclose the fact that I have a TCU alum for a brother), although TCU has had a good program for years. Or hasn't anyone noticed LaDainian Tomlinson?

Having Boise and/or TCU in the title game would be a joke.