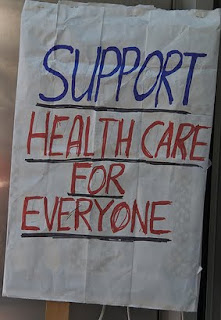 y a failure of the American people to reach a compromise, when it is our ability to compromise that historically made our nation capable of achieving such grand goals.

The issue of slavery and to what degree the federal government ought to have any say over it ultimately resulted in bloodshed.

NOW I’M NOT saying we’re anywhere near to going to war over the issue of health care reform. But I can’t help but wonder if the great failure of this issue (which has the potential to leave some 47 million people without any form of medical coverage) is that very same inability to compromise.

For it was blatantly obvious to me on Monday that the factions on this issue have entrenched themselves. Nobody is going to give, no matter how much impassioned rhetoric is spouted by anyone.

For this is one issue where everyone is convinced they have the moral high ground.

For every person who thinks it is abominable that we could have a system where people are left uncovered in the event of a medical emergency, there are others who have a moral thought process that believes it to be absolutely wrong for the federal government to get involved in this issue.

WHETHER IT’S BECAUSE they legitimately don’t think a government agency could provide proper medical care or they just don’t want to have to think about health insurance for anyone besides themselves, they’re not budging.

I got to see one side of the issue on Monday. A Labor Day rally held at the Pullman state historic site in the (obviously-named) Pullman neighborhood was packed with people who are determined that the federal government (in the form of Congress and President Barack Obama) pass something into law that allows for a government-managed health care option for people who for whatever reason do not have health insurance.

“We elected you, so step up to the frickin’ plate,” said Cindy Fee, a pop singer who performed a number of labor-oriented folk songs as part of the Chicago rally.

Expressing a similar thought was state Rep. Al Riley, D-Hazel Crest, who said he thinks the side of the story of people who need health insurance but cannot get it through what has become the traditional means (your full-time employer provides it for you as a benefit of your job) is being distorted.

OR, AS HE so bluntly put it:

“We can’t let our story be distorted by the ‘wing-nuts’ you see on television. We’ve got to tell our story.”

Yet I can already hear those “wing-nuts” engaging in a rant about being called “wing-nuts.”

They’re going to want to claim that they represent the mood of America, and I will concede they do represent a portion of the country that has gone out of its way to isolate themselves from people who aren’t more or less exactly like themselves.

SO PERHAPS THEY aren’t exposed to the people who need a health care plan because they are out of work (an aftershock of increased unemployment due to the economic struggles the nation has faced in recent years), or maybe they’re really just callous enough that they don’t care.

But there were a good 10,000 of them present in southwest suburban New Lenox on Monday. Considering that the whole town’s population is only about 24,000 people, that many outsiders coming in caused serious traffic backups and chaos for local cops.

Reports indicate that traffic was backed up for about two miles in each direction from New Lenox along Interstate 80 at one point.

That Will County town was the site of the latest “Tea Party” tax protest, where social conservatives use the imagery of the American Revolution (they partic 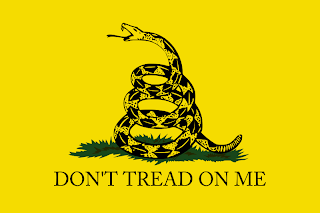 ularly seem to love the “Gadsden Flag” – the one with a snake and the slogan “Don’t Tread On Me” underneath it) to claim that “reform” of health care is just another issue where government has run amok.

NOW I MAY think these people are misguided. I may even think they are somewhat callous in their outlook on our society.

But the one thing I never will mistake them for is lackadaisical. They care about this issue, and they’re not likely to let it go.

And in one sense, they have the easier outcome to achieve. They “win” if nothing happens.

They don’t have to push for any type of legislation or a program, whereas the reformers not only have to come up with a proposal and pass it, that plan had better succeed.

OR ELSE IT will fall to the critics to use it for their propaganda purposes and try to turn it into a campaign issue come 2012 – Obama failed at what was supposed to be one of his biggest goals, so why give him a second term.

The fact that the goal was completely worthwhile and that the ultimate loser in this struggle is the American people (since having so many uninsured threatens to drag down the nation as a whole) won’t matter.

They win if we the people lose.

But trying to find that middle ground that figures out a way to cover the 47 million (which is about the equivalent of Illinois, Indiana, Michigan, Wisconsin and part of Iowa) in some fashion could be the way in which we all win, because it’s going to have to happen some day.