Blagojevich = Icarus, or a Stooge?

It was Saturday night and I happened to be in downtown Chicago with about a half-hour’s worth of time to kill when I ventured into a bookstore on State Street. 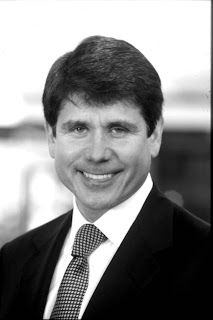 It was then that I first saw a book whose very existence will make many Illinois political observers wretch and even many other people shudder. I’m talking, of course, about “The Governor.”

THE 264-PAGE VOLUME written rather quickly in the past couple of months by our state’s now-impeached governor is out there for sale.

Perhaps it was against my better judgment, but I actually snatched a copy and put down my $19.96 (plus 10.25 percent sales tax totaling $2.08, of which 38 cents went toward Cook County government) to buy a copy.

Since then, I have been snatching glances at the copy. Not that I’ve been able to read this tome for any extended length. The self-righteous tone combined with a plodding writing style (anyone who thought Blagojevich was exaggerating when he described himself as a C-student in college will realize after reading this that he wasn’t) make it tough to read for any extended period of time.

So I have skipped about, running into little anecdotes. I encountered his description about how he would have been willing to give the U.S. Senate seat abandoned by Barack Obama to Illinois Attorney General Lisa Madigan, if it meant her Illinois House speaker father would be willing to support some of his future proposals in the General Assembly.

OF COURSE, IT never came to that, because he got indicted soon after in early December. In fact, I’m wondering if some people would think that offering a political position to a government official in exchange for political support would be considered a bribe in and of itself.

It certainly strikes me as being closer to criminal than anything that was done by, say, Dan Rostenkowski during his time in Congress (for which he wound up doing a term in prison before eventually being pardoned by former President Bill Clinton).

Yet the overall point of this book isn’t really in the details supposedly being offered by Blagojevich about Illinois government (I haven’t yet found the part where Blagojevich claims White House Chief of Staff Rahm Emanuel asked for help in putting together a deal by which Emanuel could return to Congress in a couple of years, possibly in a high-ranking position of authority).

This is all about Blagojevich telling us repeatedly, “I didn’t do it.”

HE DECLARES FLAT-OUT that he did nothing illegal in handling the selection of a new Senator to replace Obama. “That accusation is completely and entirely false,” he writes.

He also starts out his book by telling us his impression of Inauguration Day, watching Obama take the oath of office in the District of Columbia while he was in a federal courtroom in Chicago.

As Blagojevich put it, Obama was “Zeus on top of Mount Olympus,” while he had become “Icarus, who flew too close to the Sun and crashed to the ground.”

It’s like this all the way through, saying that the end result of all the legal procedures he is going through is that he is no longer a governor who can try to take positive action on issues such as health care, unemployment and housing.

OF COURSE, HE even takes his shots at the sometimes hysterical news coverage of his arrest and indictment, noting how U.S. Attorney Patrick Fitzgerald’s line about Abraham Lincoln “rolling over in his grave” was just as over-the-top a statement, yet was given credibility by the reporter-types on hand that day at the Dirksen Building.

According to Blagojevich, the person who really was rolling over in his grave was Edward R. Murrow of CBS.

Yet in the portions of the book that I have seen (I don’t know how long it will take me to get through the volume, particularly since I also picked up another book about the life of one-time Congressman and alderman William L. Dawson that strikes me as being more interesting), there is one moment that truly catches my attention.

It probably gives us the biggest sense of how Blagojevich truly sees himself.

HE DRAWS COMPARISONS between his own plight and those of Martha Stewart and Lewis I. “Scooter” Libby – both of whom faced federal prosecutions that Blagojevich says he thinks did not do anything that ought to be considered illegal.

As Blagojevich writes of Libby’s case, “they were determined to get him. It got to the point where it didn’t matter what the truth was. The federal prosecutor had made such a big deal out of this investigation that the case became more about the prosecutor’s own self-preservation than justice.”

Then, of course, Blagojevich writes, “that same prosecutor is prosecuting me.”

I’m sure in Milorod’s mind, some sort of eerie music plays to emphasize the “unjustness” of it all.

YET IN MY mind, the theme music ought to be something more along the lines of the version of “Three Blind Mice” that used to accompany the introductory credits to the “Three Stooges” shorts.

At least that would have the right tone of buffoonery to it.

EDITOR’S NOTES: It appears the Associated Press gave “The Governor” a thorough read (http://www.chicagobusiness.com/cgi-bin/news.pl?id=35307) more quickly than I did.

Could this be the (http://www.youtube.com/watch?v=hF_rWzDlL5U&feature=related) proper theme music for anything related to Blagojevich in the future?
Posted by Gregory Tejeda at 12:01 AM