As in Diddley (well, sort of).

THAT IS THE name the Obama family plans to give to the dog they plan to acquire this week, bringing an end to months of speculation that Barack Obama was somehow trying to back out of the deal he made with his daughters (that they’d get a dog if he won the ’08 presidential election).

Sure enough, that story is snatching its share of attention, both from animal lovers who want to go on about how cute is the doggie in the White House window, and from those people who are determined to disparage anything connected to Obama.

Reading various website commentary sections has subjected me to wisecracks about the Obamas getting a “sissyish” looking pet (a Portuguese water dog) that will cause world leaders to hold the U.S. up to ridicule, or claims that Obama is using the dog to detract from his refusal to take solid action to free a sea captain who has spent the past few days in the custody of “pirates.”

Of course, the fact that Navy Seals managed to perform a rescue operation on Sunday that resulted in Richard Phillips being freed kind of undercuts that argument. But never let irrelevance prevent a crackpot from shooting his mouth off anyway. 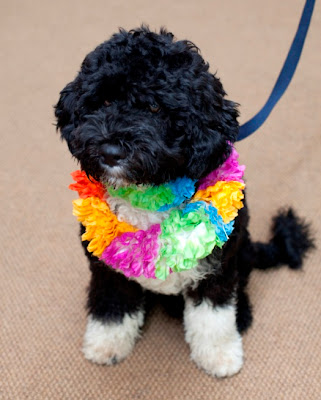 How many people would have gotten a kick out of White Sox fan Obama naming the family pet for the one-time Sox designated hitter? Photograph provided by the White House.

IN SHORT, THE Easter Sunday newscasts were dominated with stories of local Easter egg rolls, the piece or two of a local mass being held, the pirates and the dog.

This is the state of news judgment, as it exists in these early years of the 21st Century.

Now I’m not much of an animal lover. I have never had a dog, nor have I ever wanted one.

But there is something about this particular story that catches my attention, and not just because of how they picked the name (no, it’s not for Jackson or Schembechler).

IT COMES IN part as a tribute to the maternal grandfather of the Obama girls, who was nicknamed Diddley because of his love for the original Bo’s music.

Perhaps this means “Say Man” or “Bo Diddley” (the song, not the man) will become the official theme music of the Obama administration. Perhaps it literally is a political statement that they tried to find a dog from a shelter, and will still make a financial contribution to a shelter to show their support.

Or maybe this is just an otherwise slow news day being filled with content that gives us a little bit of perspective on the family life of the new first couple (who still have another 3 years, 9 months, with an option for four more years, on their time in the White House).

So for all those people out there who are ranting and raging about the “butt-kissing news media” (most of their phrases are much more tacky) willing to write anything that makes Obama look good, I’d have to argue what else was there.

YOU CAN’T VERY well do entire newscasts devoted to priests and ministers giving their Easter sermon. And it’s not like the “pirate” story got lost in the shuffle.

I have seen the Associated Press account of the gun battle between the Navy and Somali pirates turn up on many sites. It is getting its share of attention.

What intrigues me about this story is that it appears the rescue wound up straying into the jurisdiction of Kenya – which is the ethnic homeland of Obama himself.

For those who wonder if Kenya will be willing to prosecute the surviving pirate (three died in the gunfire), I have to wonder if the presence of Obama is enough to ensure that some action will take place.

NOW I DON’T mean to trivialize this story, but I have had my problem with the way it has been perceived for the past few days – mostly because of the repeated use of the word “pirate.”

Some people are probably envisioning a modern-day version of Captain Hook, and somehow thinking there is something quaint about having pirates in the 21st Century. What we’re really talking about here are thugs, petty criminals whose reason for operating at sea is because they think it allows them to elude anyone’s legal jurisdiction.

The captivity of Phillips, in many ways, is little more than a petty kidnapping and hostage situation. It is the kind of incident that people would normally lambaste news organizations for overplaying.

That is why I have a hard time thinking of it as some major international scandal.

IN THAT CONTEXT, I find the selection of a new White House pooch to be a more interesting story.

But the bottom line is that both of these stories gained as much attention as they did because it was a Sunday. What else was happening?

There was a reason that Pat Quinn used to make his major pronouncements at mid-day Sunday. It ensured that news organizations would be so desperate for fresh news copy that they’d cover him – no matter how minor his action turned out to be.

If either of these stories had occurred even 24 hours later (such as Monday morning), they would have been rendered to the recycling bin after getting a brief sentence or two mention.

Somebody at the Washington Post lost his/her chance to think he/she “broke” a major story (http://www.guardian.co.uk/world/2009/apr/13/barack-obama-pet-dog) when the celebrity-oriented website TMZ.com (http://www.whitehouse.gov/blog/09/04/12/Meet-Bo-the-First-Dog/) came up with pictures of Bo first.
Posted by Gregory Tejeda at 12:01 AM