I couldn’t help but laugh earlier this week when I saw that figure. It is the grand total of ca 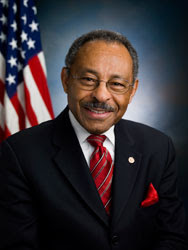 mpaign contributions received by Sen. Roland Burris, D-Ill., during the first three months of this year.

A lot of people have been hitting hard the other figure that came out concerning Burris – the notion that 62 percent view him unfavorably and do not want him to run for re-election. That figure doesn’t concern me much. I would be shocked if it weren’t so high, considering how all the public talk about Burris has focused on the means by which he got the Senate appointment.

BUT BURRIS, WHOSE ego historically has been so bloated that I can’t believe he doesn’t view himself as a legitimate candidate for a full six-year Senate term in the 2010 elections, has to be shuddering at the thought of that latter figure.

Adding a grand total of $845 to his campaign fund means that he is irrelevant to the people who are considering opening up their checkbooks and giving a financial jolt to the political people whom they’d be inclined to support.

I almost wish I could have been on hand at the moment that Burris himself was forced to confront that figure. It must have been devastating to him.

I can already hear the spin that the Burris people will put on this figure. It’s early. There’s still time to raise money for a political campaign that most people haven’t given much thought to yet.

THEY WOULD BE correct, to a point. It is early. The serious fundraising that will be done by the campaigns of officials who want to run for statewide office in Illinois in 2010 will be done in the later part of this year.

I expect even Burris will get some donations from people who will want to maintain the goodwill of the incumbent junior senator from Illinois. There’s no way his disclosure reports for the rest of the year will be equally pathetic.

But if Burris has any sense, he will take this pathetic joke of a campaign fund figure into account (http://newsblogs.chicagotribune.com/clout_st/2009/04/us-senator-roland-burris-rod-blagojevich-raises-only-845.html) and give serious thought to the concept that he’s the filler for what is left of Barack Obama’s term in the U.S. Senate – and nothing more.

About the only person who could look at this positively is Gov. Pat Quinn. He finally has a Democrat who is a worse fundraiser than himself. What else is in the news along the shores of Lake Michigan?

THERE IS NO NEW ROYKO: How far have the voices of Chicago journalism sunk? I can’t help but think it must be pretty low, since Jimmy Breslin has signed a contract to write (http://www.publishersweekly.com/article/CA6652274.html) a book about our now impeached-and-indicted Gov. Rod Blagojevich.

Not that I have any problem with the work of Breslin, who wrote his columns for four decades for just about every New York newspaper except the Times. I used to enjoy them, and forgive him for his final column that got everybody’s hopes up by predicting a John Kerry victory in the ’04 presidential election.

But the idea of a New Yorker being used to tell a story of Chicago and Illinois political matters is galling. I’d like to think that one of this city’s columnists who routinely pontificate on such issues ought to be capable of producing what should be the “definitive’ Blagojevich book (since his own tome is going to be little more than an attempt at revisionism).

Just think of how embarrassing it would have been for this city that likes to think it has a literary character in its working class roots if “Boss” (the Richard J. Daley story) were written by someone other than Mike Royko?

WHO’S LEFT IN THE NEWSROOMS?: The Chicago newspapers lived up this week to one of the long-lasting traditions of competitive journalism – if you want to learn about the business operations of a newspaper, you have to read the competition.

The Chicago Sun-Times couldn’t help but come off as gloating as they reported the story (http://www.suntimes.com/business/1525005,CST-FIN-trib14.article) that the competing Chicago Tribune was preparing for yet another round of layoffs, including some of the editorial talent that attempts to make the publication worth reading.

In all, the Tribune prepares to let some 90 people know they no longer have gainful employment. It comes at a time when Tribune Co. CEO Sam Zell goes around publicly saying his purchase of the media company was “a mistake.”

Yet leave it to the Tribune to engage in a sense of payback in reporting that the Sun-Times News Group is doing its own layoffs to reduce the payroll by 15 percent. None of those (http://www.chicagotribune.com/business/chi-sun-times-layoffs-apr17,0,4201502.story) are Sun-Times people. The newly unemployed are the journalists (including some high-ranking editors) who staff the suburban newspapers that likely would be doing respectably financially if they weren’t tied into the morass that has become the Sun-Times. 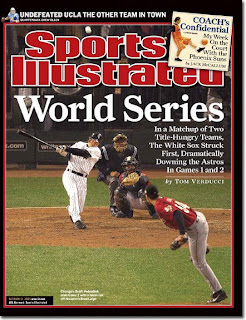 WHERE’S LISA DERGAN?: Scott Podsednik, the base-stealer who hit the Game 2 winning home run of the 2005 World Series (I still have the Sports Illustrated cover of him swinging the bat just after at the moment of impact with the ball), is now a Charlotte Knight.

Which of course means that he’s back in the Chicago White Sox organization, and could wind up playing ball on the South Side if the Sox’ center field options all fizzle out.

The hope is that he gets sharp playing a few games for the Sox’ International League affiliate. Not that he’s done too much thus far. As of Friday night, he was hitting .125 (http://www.minorleaguebaseball.com/milb/stats/stats.jsp?n=Scott%20Podsednik&pos=&sid=t494&t=p_pbp&pid=325392) with two strikeouts in two games.

On the one hand, if Podsednik actually winds up getting called up to the White Sox, it would mean the on-field activity is pretty sad. But it could also be cheery to the U.S.
Cellular Field ambiance if Podsednik brings Miss July 1998 (a.k.a., his wife http://www.lisadergan.com/) to Chicago for the summer.