For all I know, by the time you read this, Chicago may have its first case of the swine flu.

We’ve all heard the horror stories about the strain that is spreading through Mexico (but which President Barack Obama appears not to have contracted when he was in Mexico City last week), and which officials now fear will work its way through the United States.

CONSIDERING HOW MUCH of a transportation hub Chicago is because of O’Hare International Airport, I’m surprised that some international visitor didn’t manage to leave the Second City a souvenir, of sorts, during their brief stopover.

That’s really all it takes for this thing to be triggered.

I’m surprised to learn that Ohio and Kansas managed to beat Illinois to having confirmed cases of the virus within their boundaries. 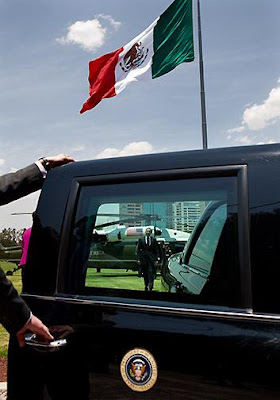 According to White House doctors, President Obama appears not to have contracted the swine flu during his recent visit to Mexico City. Photograph provided by White House.

Not that I view this as some sort of bizarre competition. But as of Sunday night, the Illinois Department of Public Health was unaware of any instances of the virus occurring here.

BUT THE CHICAGO Health Department is taking what I consider to be a much more realistic approach to the issue. They’re accepting it as fact that the virus will break out here, probably in the city proper – if not one of the hundreds of suburban towns that surround us.

“There’s no reason to think that we won’t eventually see it in the state of Illinois and city of Chicago,” health Commissioner Terry Mason told reporter-types.

Thus far, there have been 20 reported incidents of the virus spread over five states. Many appear to be people who have traveled in recent weeks, such as the New York high school students who took what should have been a life-long memory trip to Cancùn.

It will be memorable, but not for the reasons they intended.

NOW I DON’T mean to downplay the seriousness of the virus, which has already killed some 86 people in Mexico and has left about 1,400 ill during the past few weeks. If quick actions are not taken, it can inflict serious harm on a person – as well as spread so quickly from person to person.

But part of the reason I’m not panicking is that I have enough faith in our public health systems to cut this potential problem off before it gets too far out of control. In part, that faith is because I choose not to live my life isolated in a cave somewhere, which is what it would take for someone to avoid all the potentially bad things that can happen in life.

And I also have enough sense to realize that Mexico doesn’t have some special claim to this virus. For those people who envision closing the border crossings along the Rio Bravo del Norte/Rio Grande in the name of keeping the U.S. free of a virus, it ain’t gonna happen.

Homeland Security Director Janet Napolitano said as much on Sunday, although people entering the U.S. from Mexico are going to have to submit to a few questions about their health before being allowed to cross the border.

FOR ONE THING, in today’s world of international travel, it is the airports that are the true entry points. And there could very well be people going from Mexico to somewhere else (and maybe another place as well) before entering Chicago or the United States.

Officials note that the quarantine facility at O’Hare International is now up and running in case anyone needs to be detained for a time. Homeland Security officials also said airport officials will be watching all people passing through, which is a good thing.

Focusing too much attention on Mexico when it comes to this particular viral outbreak is a mistake. This is a disease that doesn’t particularly care about ethnicity. It will take out anyone it can.

So the nativists who are going to start clamoring for stringent restrictions on travel to and from the land south of the Rio Bravo del Norte are guilty of nothing more than trying to use a potential health risk to stir up fear that backs up their own nitwit thoughts.

SO HOW GOOD are the chances that people in Chicago will someday be wearing those white masks that we’ve all been seeing residents of Mexico City wearing?

It could happen, although that would be the worst-case scenario.

I’d hate to see Chicago have to become as stringent as the Mexican capital, where officials have gone so far as to shut down most public facilities in an attempt to reduce public interactions that could spread the virus further.

EDITOR’S NOTES: Chicago officials are preparing for when (not if) the swine flu (http://www.chicagotribune.com/news/chi-ap-il-swineflu-illinois,0,3135647.story) finds its way to our city. Even the Chicago Public Schools are pitching in with the effort of trying (http://www.wrex.com/Global/story.asp?S=10252391) to find potential viral outbreaks before they occur.

Here’s hoping Chicago does not come to resemble the Federal District of Mexico when it comes (http://www.npr.org/templates/story/story.php?storyId=103509097) to daily life in the wake of the swine flu virus.
Posted by Gregory Tejeda at 12:01 AM

The fact the current 'swine flu' has shown to be contagious is alarming. So far the virus has shown to have a 6% to 6.3% mortality rate. It may not seem like much, but please consider the following: The deadly influenza panic in 1918 had a mortality rate of under 1%.

This virus went on to kill tens of thousands of healthy people a day in large cities and up to 100 million people world wide.

Viruses, like this strain of swine flu, kill their host by over-stimulating active immune systems that are robust and healthy. That is why the victims in Mexico were between the ages of 20 and 45.

Some have said that no one in the United States have died from the virus, so we need not worry. Experts say it is only a matter of time. The virus is not prevalent enough to reach statistical significance in the United States, with only a handful of confirmed cases. 93.7% of all Mexicans with the virus recovered.

More cause for worry: The 1918 virus started off 'mild' before it mutated into a raging storm. It also does not mean we will see millions of deaths. It is too early to draw sweeping conclusions. Nevertheless, there is potential for a disastrous pandemic. If 50% of Americans catch this flu in the next two years, and the mortality rate stays at 6.3%, we would witness 20+ million deaths.

This strain of virus is more potent and more deadly than the virus that hammered the world in 1918 and 1919. Viruses come in waves. There are striking similarities to this virus and the virus that killed up to 100 million people in 1918. The first wave is historically more mild than the later waves.

In addition to this virus becoming more severe, it is mutating faster than previous virus that we have seen. In addition, this virus is nothing like we have ever seen before because it combines features from viruses natural in different parts of the globe. We are in uncharted territory.

If it follows the same path as the 1918 flu, we will see very damaging results. However, we must remember we are a global society now and the virus can spread quicker than we have ever witnessed in history. This is very concerning especially since the drugs we have now seem resistant.

While there have been no deaths in America, it is shadowed by the fact the common variable among the deaths seem to be age. While most American cases have involved the very young and very old (under 10 and over 50) the Mexican cases that ended fatally involved the robust and healthy (over 20 and under 45).

This virus kills the host by over-stimulating the immune system. The term that is used when the immune system over reacts is called a Cytokine Storm. It is usually fatal. During this “Storm” over 150 inflammatory mediators are released. This would account for the high mortality rate in 1918-19.