The Illinois General Assembly had just sworn in new members about an hour earlier on Jan. 8, 1997, when a Democratic legislative aide led a gangly newcomer to the Statehouse pressroom to meet me as part of a quickie tour of the capitol building.

Back then, I covered Illinois p 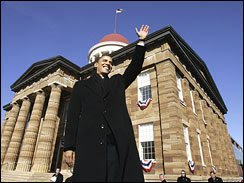 olitics and oversaw a bureau for United Press International. The aide was an aspiring political operative who previously held my job with UPI, and he brought the freshman state Senator for an introduction in hopes that some spark might arise that could pay off big in the future – stories for me and sympathetic coverage for the new senator.

It didn’t quite work out that way, and it’s a shame for me professionally because the skinny senator with a big grin was Barack Obama.

At the moment Obama approached me, I was tied up in trying to grind out stories about the swearing in of a new Legislature; one that shifted control of the Illinois House of Representatives back to the Democrats and ended a two-year era in which Republicans dominated Illinois politics, controlling everything except the state Supreme Court.

Hence, our first meeting was little more than a handshake and a promise to get together in the future to talk more extensively about issues – which turned out to be like those promises to “do lunch” that never come about.

Now I can make excuses by saying the GOP still controlled the state Senate and was run by a man – James “Pate” Philip of Wood Dale – who was particularly determined to let Democrats know they were irrelevant. So meeting any freshman Democratic senator was a low priority for me.

But the reason I remember the meeting so vividly is because I remember later that day kicking myself for not getting something more from Obama. I sensed he was going to be someone special in public life, although if I would have had to bet money back then on his future, I would have guessed he’d become a member of a president’s Cabinet instead of sitting at the head of the table.

I had heard from Springfield about Obama’s 1996 Illinois Senate campaign on the South Side of Chicago, where he was able to run unopposed by forcing an incumbent member of the Senate to drop out of the race to avoid an investigation into whether her nominating petitions were legally flawed.

I had already read his first book, “Dreams from My Father,” and was in awe of the notion that someone barely older than I am (he’s got four years on me) could have enough self-confidence to think his life story was worth having others read about.

It didn’t help that Obama officially was part of the Legislature’s Black Caucus, consisting of the African-American legislators from inner city Chicago and East St. Louis and usually comprising about 30 of the 177 members of the General Assembly.

To the many lawmakers who came from areas where African-American people were non-existent, the caucus often came across as something alien and shrill -- best marginalized or outright ignored.

When Obama tried to overcome that attitude by creating ties with suburban Chicago and rural lawmakers (including Republicans), his Black Caucus colleagues began to distrust him.

There also was that degree from Harvard Law School, which made Obama stand out among a pack of lawmakers – many of whom got their legal education at the Chicago-Kent School of Law or the law school at Southern Illinois University in Carbondale.

Not to knock the quality of an education one can receive at either of those institutions, but the criticisms that Obama was an “Ivy League snob” all too often sounded like petty jealousy, rather than any serious reason to doubt Obama’s ability.

For Obama’s sake, it was a good thing that he moved “up and out” from Springfield, Ill., and into the world of public policy in Washington.

While D.C. has its share of political hacks, Statehouse scenes usually are dominated by people who can block out the Big World picture and get ahead by being able to master arcane legislative procedures to get bills passed into law. Concern about whether those laws benefit the public is irrelevant.

Alton Miller, in his memoir of what it was like to work for Chicago Mayor Harold Washington, quoted his former boss (who also served in Congress and the Illinois House) as saying, “the IQ standard is about as high (in Congress) as you’re going to get anywhere in the world. I mean the average is way up there. It’s not like City Council, or the state legislature.”

So as Obama prepares for his first serious test of whether or not he’s a legitimate candidate for president, I must admit I’ll be watching Thursday’s caucus results in Iowa closely, even though I’m not sure yet whether I’ll vote for him. There are aspects of Hillary Clinton and John Edwards that I find appealing. Even Bill Richardson could make a fine office holder, even though he has run a worthless campaign to date.

Obama’s not the first Chicago political type I covered to move on to Washington. I have first-hand memories of about a half-dozen of the 19 current members of Illinois’ congressional delegation. I also remember past D.C. bigwigs like Carol Moseley-Braun from when she was a lowly state legislator and Cook County recorder of deeds.

But it would be nice to say I saw a future president in his early stages. I only wish I had a quirky story to tell of Obama’s formative days at the Statehouse in Springpatch.

The best I can do off the top of my head is to recall one St. Patrick’s Day (either 1998 or 1999) when the debate in the Illinois Senate was getting a little giddy (maybe somebody snuck in some green beer).

Suddenly, now-retired state Sen. Denny Jacobs, an East Moline Democrat, felt the need to get up and say that St. Patrick’s Day was a wonderful holiday because it was a day on which everybody could be Irish.

His evidence? “Why look at my colleague, Barack O’Bama!”