Chicago the image of U.S. ideal 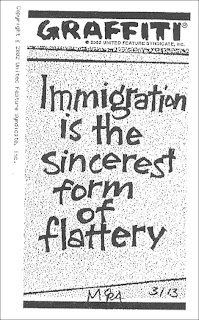 One of the aspects of Chicago’s character that I enjoy the most is the fact that the city is such an ethnic mishmash.


The African American population is larger than any other group in Chicago and the number of Mexicans is growing to the point where roughly one of every six Chicagoans is of Mexican descent. For all Latino ethnicities, the total is roughly one of four Chicagoans, and officials estimate they will account for about one-third of the city by 2020.

But ethnicity is not something limited to non-white people in Chicago. The Irish remain a visible presence in the city and there are more Poles here than anywhere outside of Warsaw. In fact, just about every ethnicity imaginable has some sort of neighborhood or enclave somewhere in Chicago.

The latter is what gives Chicagoans a unique perspective with regards to the debate going on in this country on the issue of immigration. In Chicago, even the white people have a sense of who they are and what they descended from.

That’s not the case elsewhere.

When I lived in rural Illinois (college, then later a reporting job covering news at the Statehouse in Springfield, Ill.), the white people surrounding me were just white. Most were not really clear as to what they were descended from, and some acted as though it was downright un-American to even be curious about an ethnic past.

I still remember one person I encountered in Springfield when she and her husband moved to the Chicago area due to him getting a better-paying, more stable job. She was dreading the move out of some fear that she would be the lone person on her block who could speak English.

Of course, the home they bought was in a lily-white suburb to the northwest of Chicago. Her fears were irrational, but there was nothing I could say to make her realize that.

I think of these differences whenever I hear the latest tidbits about immigration and the desire by some to tighten the laws concerning people entering this country. Some go so far as to want to erect a wall along the southwestern border between the United States and Mexico.

Appealing to those people and their votes is the motivation behind the Republican presidential candidates in trying to see who can make the most xenophobic comments on immigration policy.

But in places like Chicago, where Democratic politicians prevail, such talk does not play very well. I’d like to think that in Chicago and other urban places, people are forced into contact with one another. While we don’t always “play nice” with each other, differing ethnicities are forced to see each other as people.

In more isolated areas of the country, the homogeneity of the population causes people to fear anyone who is not as homogeneously non-ethnic white as they are.

As one may gather from reading this, I was disappointed to see Congress do nothing in recent years with regard to reforming the immigration laws. What people are going to have to accept is that the United States is basically an ethnic and racial mutt, and that is good.

It means that this country is basically receiving the best bits of everyone on the planet and becomes stronger as a result.

Now for those people who invariably are going to say they are only against illegal immigration, I have to say, “That’s a lie.” When one gets these people to elaborate on their beliefs, it ultimately turns out that they have strict ideas about who should and should not be allowed to have legal status in the United States.

It amazes me the numbers who think that Mexican people should fall into the latter category, especially in parts of the country such as California and Texas that were once states in the Republic of Mexico, now known officially as the United Mexican States.

Even if somehow, a Jim Crow-like mentality managed to prevail and government officials did enact a batch of laws that allowed for mass deportations back to Mexico, there would still be a strong Spanish-speaking presence in this country on account of the fact that Puerto Ricans are U.S. citizens by birth and because of all the Cubans who were allowed easy access to the United States as our way of “flipping the bird” at Fidel Castro.

The numbers of people already here are just too massive for any racist crackpots with ridiculous rhetoric to overcome. In the end, the crackpots will lose.

People in isolated areas may look around them and see a white mass and assume they are an overwhelming majority. But places like Chicago, which contain a bit of everyone, bear more resemblance to the real world than places like Pekin, Ill., ever will.