There’s something about any attempt by a political official to apologize for saying something stupid that always manages to come off as insincere – it winds up sounding like the only thing you’re “sorry” for is getting caught!


That certainly is the case for the Illinois Republican County Chairman’s Association – which how has on its Facebook page a prominent post apologizing for the fact that they let a lame gag get put on their site to begin with – one that attempted to trash the four members of Congress whom President Donald Trump has engaged in trash-talk against.


IT SEEMS THAT Republican-leaning political operatives created a graphic labelling the four as “the Jihad Squad” and implying just how subversive we ought to consider them to be.


“If you don’t agree with their socialist ideology, you’re racist,” is what we’re told. Implying that Donald Trump is totally justified in all of his trash talk against the women – whom the one thing they have in common is that they’re not white.


The graphic, which actually is a parody of sorts of the advertising posters for the “Charlie’s Angels” films (the more recent movies, not the ‘70’s era television show), is labeled as being put together by the national Republican County Chairman’s Association, which then had it put on the sites of their various affiliated organizations.


Which led to the Illinois chapter early Monday publicly removing the post, with chapter President Mark Shaw saying the post was “unauthorized” and, “I am sorry if anyone who saw the image was offended by the contents.”


NOW FOR ALL I know, Shaw may well be sincere in his apology. He may well be shuddering at the thought that he’s affiliated politically with the kind of people who’d think this ad parody is somehow clever. Even Illinois Republican Chairman Timothy Schneider was embarrassed, saying he thinks the graphic, “does not reflect … the Republican Party’s values.”


But I don’t doubt there are people who consider themselves good and loyal Republicans who have absolutely no problem with this kind of image being spewed and who will now think the “problem” is that the GOP has people who can’t get on board with their initiative.


But even more so, I think it comes across as downright lame. It’s almost the kind of image I’d expect that 12-year-olds would find amusing. But then again, there are times I wonder if the mentality of our political people has delved down to the level of pre-teens who think fart jokes are funny.


WHICH MEANS I can almost sympathize with the Republican operatives who now have to address this image and try to explain away how anyone could seriously have thought it would possibly attract anyone to the political cause.


I don’t doubt it will keep the hard-core ideologues aligned. But then again, that may well be the political strategy for the 2020 election cycle.


Make sure the ideologues turn out in force to back the re-election of Donald Trump and anybody whose presence would not conflict with ‘the Donald,’ and scare off anybody who’d be inclined to want to raise the elevation of political discourse these days.


But then again, I also don’t doubt there are some who are ideologically-inclined to want to sink the level of discourse to this level – it’s much easier to understand. Four crazy broads! All of them with big mouths!  And most importantly, none of them white!


NOT EXACTLY AN issues-based campaign theme. Not something that would bring out the intellect in would-be voters.


More like something simple that would reduce the election cycle down to something we can either laugh at – or lambast those who don’t think it’s funny as being mere “snowflakes.”


Which in-and-of-itself is a political label that gets used far too often.


Although I think one anonymous Internet commenter may have stated it best – this “Jihad Squad” graphic is just too stupid for anyone thinking about voting to take seriously. Although we’ll have to see if it’s too stupid that it winds up costing anybody a vote come Election Day. 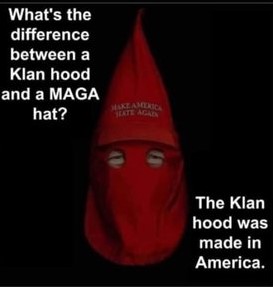 EDITOR'S NOTE: Some Republicans are tossing out their own response, trying to claim Democrats are no better. They're citing a blurb posted on the website of the Kankakee County Democratic Party that equates those "Make America Great Again: caps with the pointy hoods of the Ku Klux Klan -- if only those hoods were an obnoxious bright-red. Crain's Chicago Business is reporting that Democrats are in a similar circumstance for their Internet attempt at humor. Although I can't help but wonder who is really offended by the gag.
Posted by Gregory Tejeda at 12:01 AM