The Chicago White Sox were in Anaheim, Calif., Thursday night, finishing up a series against the Los Angeles Angels that has been as dismal (three losses thus far) as much of this season (55-63, or a .466 winning percentage). 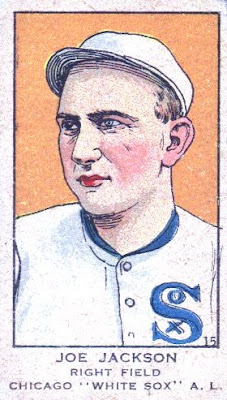 So if you want to find a moment of glory connected to the Sox, you have to turn to history.


FOR IT SEEMS that Aug. 20 is a fairly historic date connected to the American League’s franchise in Chicago.


It can be argued that the greatest ballplayer to ever wear the White Sox uniform was “Shoeless” Joe Jackson, whom the White Sox acquired in a trade with the Cleveland Indians on Aug. 20, 1915.


Back in the day, it was a big money deal – Cleveland got $31,500 in cash, along with three journeyman ballplayers. The White Sox got the guy who arguably was the second-best hitter in the American League – behind Ty Cobb of the Detroit Tigers.


Seriously, how many .400 hitters (.408 in 1911, compared to .420 for Cobb that same season) can’t even win a batting title. And still hold the Cleveland and Chicago team records for triples.


JACKSON, OF COURSE, went on to help the White Sox win American League championships in 1917 and 1919. They got a World Series title in the former, but about all most people remember about Jackson these days (aside from thinking he looks and sounds like actor Ray Liotta) is that he was one of the eight ballplayers who got indicted on criminal charges for allegedly taking money to play less-than-well during the ’19 World Series.


That was a stink that lingered over the franchise for decades; one that some Cubs fans would like to think still ought to be associated with the ball club all these decades later.


Of course, time passes, and it was 50 years later to the date that another moment occurred on the grounds where Shoeless Joe once roamed.


The White Sox themselves were in Kansas City, Mo., to play the Athletics – whom they beat 3-1.


BUT THE BALLPARK still saw one of the city’s moments – the Beatles were on their 1965 tour of the United States, and 50 years ago this date they were in Chicago.


Where the music fans packed their way into the 45,000-seat ballpark to see one of the biggest rock music groups ever give one of their many less-than-stellar performances.

It’s the drawback of playing day after day after day of the same set of songs. Although I’m sure those who were actually on hand in the ballpark that day could care less. For all I know, the prepubescent screams drowned out the actual sounds of music that came from White Sox Park that day.


Even Ringo Starr gave an interview in the basement of the ballpark saying he thought that the people in the stadium, “they’re too far away, really” to enjoy the music.


Somehow, I suspect there won’t be anything terribly notable about the date. Unless you get excited by the anniversary coming up on Saturday – 49 years since the last time the White Sox ever wore shorts during a regulation ballgame.