We all did the routine this weekend of resetting our clocks, on account of the fact we’re off Daylight Savings Time and will now spend the next four months on standard time. 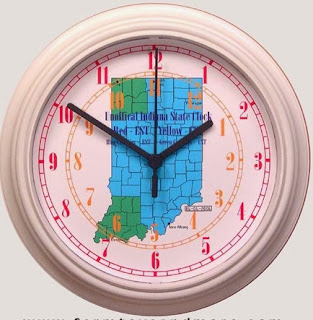 Which some people like to get all worked up about. Daylight Savings Time is some sort of artificial scam that takes us away from viewing time in terms of the way the Good Lord willing meant for us to do so.


PERHAPS I’VE JUST been reading too much of the commentary posted by my Facebook-type “friends.”


But yes, the whole issue of time has gotten some of them worked up – particularly those with ties to Indiana. For that is a state that particularly confounds the whole concept of time. Which makes me wonder if their confusion has the potential to spill over the state line into Illinois.


Some of us are just itching for an excuse to rant about something. Perhaps they’ll find a way to blame Daylight Savings Time on Barack Obama!


Indiana is a state in the Eastern Time Zone – except for those portions around Gary and the state's Southwestern portion right on the Illinois/Indiana border. They follow the concept of “real” time – which I define as being whatever time it happens to be in Chicago.


LET THE REST of the world follow our clock, as far as I’m concerned!!!


I do remember a conversation I once had with a college classmate who was from Indiana (Wabash, if I recall correctly) who tried to argue that Indiana was most logical when it came to time zones and Daylight Saving vs. Standard time by saying, “We never have to change our clocks.”


Considering how the whole concept of moving forward or backward an hour confuses many of us, that may be a legitimate point. 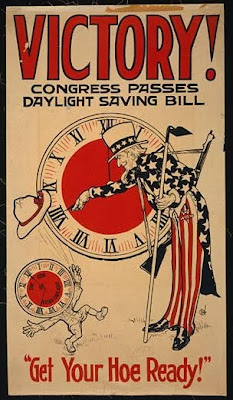 Although I wonder at times if the fact that the bulk of Indiana never experiences the once-a-year concept of gaining an hour of sleep means they’re somehow not-quite rested enough. Maybe that’s why Hoosiers are a unique (and, at times, illogical) breed.


PERSONALLY, I VIEW the concept of Daylight Savings Time as the norm – largely because it’s what we experience for eight months out of the year. It is the concept of Standard Time that has become bizarre – and depressing.


Let’s face it. Who really wants the shortened daylight that’s going to literally turn sunset into some time about 4:30 p.m. Although I have to admit those days back in mid-June when the sun didn’t go down until about 9 p.m. seemed equally freakish.


Not as odd as the idea of the midnight sun somewhere in isolated Alaska. But close!


Yet there are those who will vehemently argue for the demise of Daylight Savings Time just as intensely as any National League baseball fan who can’t accept the fact that the existence of the Designated Hitter has become the norm in baseball and that it is THEY who are the oddballs.


I MENTIONED FACEBOOK earlier, literally because I read this debate about whether Indiana should shift time zones, with many insisting their state is Eastern (as though they can’t see on a map that they – and Michigan too – ought to be Central time).


I’d hate to see that shift mainly because I can envision the chaos that would result if State Line Road also became a time zone boundary. The southeastern portion of the greater Chicago metro area would literally be ahead of the rest of us – and would further be isolated.


If anything, there is one place that may have the whole concept of time correct – the ballpark. For I still remember a feature story I once read about people who worked at Comiskey Park during the off-season. The writer noted that the clock on the old center field scoreboard (with all its lights, pinwheels and explosives) was an hour off – because it never gets reset.


Because by the time the baseball season begins again, it will once again be Daylight Savings Time – and all will be right with the world.


EDITOR’S NOTE: My own confusion with the time change involves having to remember which of the clocks around my humble abode need to be reset, and which will reset automatically. If I get careless, I gain two extra hours, and my whole routine is off for days to come.
Posted by Gregory Tejeda at 12:01 AM