The Redskins used to be about Dixie; the team name will change in due time

With the Chicago Bears headed off to the Maryland suburbs that contain the stadium used these days by the Washington Redskins, we’re going to get our own earful of the controversy about whether or not the D.C. entry in the National Football League has a tacky, offensive and racist nickname. 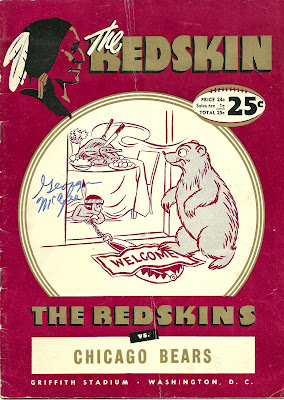 People in positions as prominent as President Barack Obama have said they don’t approve of the term that was meant as a slur against those whose ethnic origins trace back to the indigenous peoples of the Americas.


WHO SURE WEREN’T white, and to whom the phrase was meant to dehumanize them (they didn’t even have real skin like “normal” people).


So yes, it is obvious that the nickname is tacky, and if the Washington ball club were at all sensitive to the real world, they would have ditched the nickname decades ago.


But the team owners have dug themselves in, claiming that to change the name now would be to disrespect the decades of sporting glory the team has brought to the nation’s capital.


Which is stupid. But if they want to take the abuse that goes along with an offensive nickname (rather than worrying about the quality of their offensive line), then so be it. It's not a "badge of honor."


PERSONALLY, I’M NOT getting too worked up because I really do believe the day will come when “Redskins” will disappear. It will be a low-key change. And the only people who will have an objection will be those ideological twits who are determined to go to their graves defending a status quo that gave them a right to look down upon anyone who wasn’t exactly like themselves.


What makes me think this is the fact that the Washington team’s own history shows signs of change to the atmosphere and culture of professional football in the capital city.


This was once such a Southern-oriented team – one that took advantage of the fact that it was the only NFL franchise south of the Mason/Dixon Line and east of the Mississippi River where they marketed themselves as the South’s team.


Back in the days of the Civil Rights movement when Southerners were convinced those Damn Yankees were taking over the capitol, probably the only thing out of Washington they had use for was the Redskins. Now, they probably even regard the team as the “enemy.”


THIS IS THE franchise that was the last to integrate to include black athletes on the roster. 1962 – they even make the Boston Red Sox and Philadelphia Phillies look good, by comparison.


Those teams never had Illinois-born George Lincoln Rockwell and his American Nazi Party goons protesting in support of the concept of, “keeping the Redskins white.” Which is such a ridiculous concept, if you think about it.


This also is the football team whose own marching theme has been re-written throughout the years so as to tone down all the lyrical references to scalping, the lyrics written in a style as though Tonto were talking and the bit at the end where the melody of the song broke out into a line of “Dixie.” (The line about “Fight for old D.C.!” for a little while was “Fight for old Dixie”).


Somewhere in my belongings is an old vinyl record album of NFL Marching Songs from 1960 – which meant that it includes the version of the song for the Redskins as it existed back then.


TO THE MODERN ear set, hearing a Washington-song end off with the unofficial anthem of the South is bizarre. Just as I’m sure in future years, it will be equally bizarre for D.C. football fanatics to think their team used a slur as its image.


We will get to that point someday. It is inevitable.


Just as one other fact remains true. “Hail to the Redskins” may well be one of the oldest marching themes for an NFL franchise. But it’s pretty lame compared to “Bear Down, Chicago Bears.”


Go Bears!!!!!!!!!!!! And maybe Washington could take lessons from our very own Chicago Blackhawks about how one can use native imagery in their identity without being so blatantly offensive.

EDITOR'S NOTE: I don't agree with publications that think they're taking a high-minded stance by refusing to acknowledge the nickname "Redskins." It exists. It ought to be reported as such to the point where we make it uncomfortable for it to be used by the team. Otherwise, it comes across like we're merely ignoring facts we'd rather not acknowledge.
Posted by Gregory Tejeda at 12:01 AM

If I recall correctly wasn't the original team name the Braves? If they wanted to keep an American Indian reference they could always call the team the Braves. Now in saying American Indian I meant no offense although I could just simply say Native American as well.