Those numbers represent a new poll – one that shows Rep. Jesse Jackson, Jr., D-Ill., solidly leading his Democratic primary challenger – former Congresswoman Debbie Halvorson, whose bid for a political comeback isn’t looking too good these days.
﻿
This poll was done by a group called We Ask America, which in its own analysis makes extensive mention of all the “controversies” that are supposed to be capable of  taking down Jackson come March 20. But then in giving us the figures, it says that voters in the far South Side and surrounding suburbs district “aren’t buying into conventional wisdom.”

AS THOUGH IF they were likely to vote the way they’re supposed to, Jackson would lose. It sounds a bit biased to me, almost as though the poll-taker wants to believe that this is another “Dewey Defeats Truman” in the making.

Personally, the results don’t surprise me in the least. They strike me as being completely in line with the people who live in Illinois’ Second Congressional district in the second decade of the 21st Century.

Which is to say that this is a district with a significant African-American population – even though its southern edge is in Kankakee County. It’s not really a fair game. This district is rigged in Jackson’s favor.

I have no doubt that Halvorson, the former state legislator who served one term in Congress before losing in 2010 because those Will County voters thought her “too liberal,” is working her hardest to draw out the vote for herself. I’ll even give her credit for not blatantly playing racial politics in the model of a 1980s-style “Fast Eddie” Vrdolyak.

BUT IT WILL be a factor, and I don’t just mean black people voting for Jackson because he’s black.
﻿
That We Ask America poll shows that only 21 percent of African-American people want Halvorson (compared to 65 percent who want Jackson). Among white people, 62 percent want Halvorson, compared to 29 percent for Jackson.

Considering how many more black people there are in this particular congressional district, that’s a huge advantage. When one also notes the Latino and Asian votes also swing in Jackson’s favor, one only wonders how badly Halvorson would be doing in the polls if she weren’t taking so many white votes.

What else is notable about life these days from the southwestern shores of Lake Michigan?

WHO REMEMBERS APARTHEID?: I felt a blast from the past, so to speak, when I heard the Rev. Jesse Jackson refer to the reform package being contemplated by the Chicago Public Schools as little more than “educational apartheid.”

He, and many hundreds of activists who protested the public schools Wednesday morning, said they fear the plan to close some schools and redo others will only benefit select students – with the masses being left for refuse.

“It’s a type of segregation when, within the same school system, you have an upper tier and a lower tier. It is apartheid,” Jackson said, with the reference to the one-time South African setup that relegated the nation’s black majority to minority status within their own nation.

He has a point, although I’d argue it already has taken place with the way many people with children of school age go out of their way to avoid certain school districts that contain too many “undesirable” elements. The question I’d have is to wonder how many of the Chicago Public School children even know what “apartheid” was.

WANT TO WIN AN ELECTION? CALL A CHICAGO MAYOR: President Barack Obama made the announcement about his re-election committee, formally making 30 individuals co-chairmen of the efforts.

Included among those, the Chicago Tribune reported, were the Chicago-tied (and former White House chief of staffed) Rahm Emanuel and William Daley.

Which means Obama expects the current Chicago mayor, and brother of the former Chicago mayor, to use all their skills and powers to ensure that he does not become unemployed next January.

Particularly with the involvement of Daley, whose father is alleged by the ideologues to have “stolen” the 1960 elections for John F. Kennedy, I’m just wondering how long until we get similar conspiracy theories spewed for Obama. Which may be the best evidence of how frayed the Republican presidential efforts will be. The opposition will look for excuses, rather than victory.

A NEW LOOK FOR A BALLPLAYER: It doesn’t surprise me at all to see the modern-day ballplayer bearing tattoos. But Chicago Cubs outfielder Marlon Byrd now has one all over his right arm (the one he throws with) that definitely stands out. 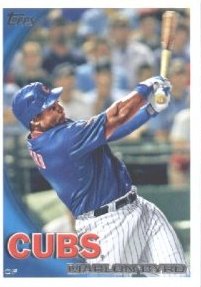 For what he did was had a portion of the “Man in the Arena” speech given by Theodore Roosevelt (as in former U.S. president) back in 1910 inked up and down his arm.

You can check out ESPN if you really care to read what Byrd likely will read every time he gives his arm a look. But political statements from Teddy Roosevelt usually aren’t what one expects from a professional athlete at any level.

Most ballplayers I have encountered would hear the name “Teddy” and think “Ballgame,’ which was the nickname that one-time Boston Red Sox star Ted Williams liked to use to refer to himself.

You can clearly see in the video interview posted by the Chicago Tribune Editorialthat Halvorson has no qualification to be in Congress. She Could not come up with one idea to reduce spending and Job creation. She tried to overstate her accomplishments in the 2 years she was in office only to be embarrased by the true facts at that Editorial Interview. When asked questions, you could see she wanted Jackson to answer first so she could piggyback of his responses. At the end of the interview I felt sorry for her and it seemed she wanted the interview to finish. She is truly over her head when it comes to Washington DC. Halvorson needs to go away and let Jackson move us forward.
Here is the link to interview.