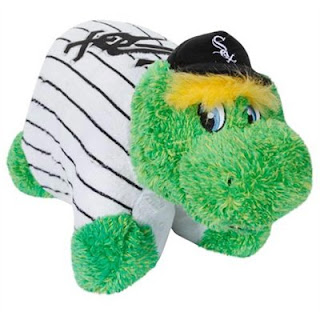 The Chicago Bears are now officially a disaster, and the hopes of many a local sports fan is banked on the idea that the Chicago Bulls might be worth something.

Yet to the nation at-large, the attention seems to be going to the split between our city’s professional baseball clubs that has become a part of the very character of Chicago.

ALL BECAUSE OF a twisted, little video snippet less than two minutes long that was shot Sunday morning when children all across the country were ripping open Christmas presents.

One mother made a point of putting her daughter’s shock, awe and disgust upon receiving a present of a pillow designed to look like a bear cub in Chicago Cubs uniform.

For that girl, it seems, is a fan of the Chicago White Sox. She reacted like the six-year-old that she is in expressing the fact that this was a horrible present (while we can see her slightly-older brother off to the side dancing around in joy, and mocking the fact that she wanted a White Sox pillow).

In the end, the mother admits the pillow is a present for her brother, and that her REAL present is in another package – which turns out to be a White Sox mascot pillow.

THE GIRL WAS pleased. All was right with the world. Even with the Bears as awful as they are, and nobody really sure if the Bulls are for real.

This video has been copied over onto many different sites on the Internet, and I saw it over and over Wednesday on CNN Headline News. I even got to hear sports anchor Carlos Diaz take a “dig” at the White Sox by mocking team mascot Southpaw. 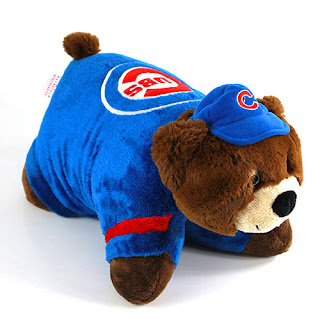 For in his view, the Cubs’ pillow depicts a cutesy bear cub. Whereas what exactly is Southpaw – other than a green, fuzzy blob wearing the black and white (with silver trim) of the White Sox?

He may have a point. There are many White Sox fans who will bash Southpaw’s existence on the grounds that they don’t know what he’s supposed to be.

ALTHOUGH I COULDN’T help but notice in the video that is drawing so many laughs and guffaws these days that the White Sox pillow’s depiction of Southpaw makes him bear a strong resemblance to Oscar the Grouch. (Does that make the Cookie Monster a potential Cubs fan?)

Which if a resemblance to a Sesame Street character were true would give Southpaw the most distinct appearance of any major league mascot (a distinction that probably goes to Friar – the bald-headed and robed Catholic padre who dances at San Diego Padres games).

But I honestly can’t say that anything about the girl’s reaction shocked me. It only means that the baseball “bug” has infected a younger generation. It may well be the reason why professional baseball lives on generation after generation – despite the best efforts of baseball people to take down the game with their greed.

There have been some jokes floating around the Internet about the state Department of Children and Family Services being called in on account of a parent allowing their children to be split between White Sox fandom and Cubs backing.

ALTHOUGH I PERSONALLY found it to be more cruel to try such a prank on the girl – making her think that she was getting one of those cutesy-poo teddy bears for a holiday present.

Then again, I’m sure this will be the hilarious home movie that the family will show year after year – and that the girl will have to live down for as long as it comes up on the Internet.

But the idea that a Chicago baseball fan of any age would react so negatively to a “gift” depicting an image of the “other” ball club? It’s not the least bit surprising. And I would expect a Cubs fan (in all their misguided sentiment) to react just the same.

For I know some White Sox fans who, upon seeing the girl being given a Cubs pillow, were probably chanting for her to feed it to that dog that was sniffing around her while opening the “present.”