I got my giggle this weekend from reading the Chicago Tribune’s attempt to ‘blow the lid” off the latest “scam” confronting our society – police in far northwest suburban McHenry County are singling out Latinos for traffic stops, then doctoring the statistics so as to cover up their harassing activity. 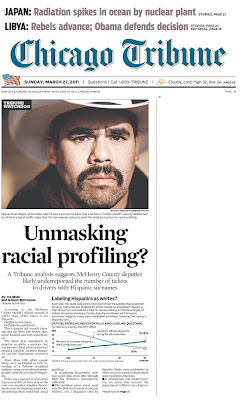 For all I know, the police up there may have some officers with ethnic hang-ups that make them think the growing Latino population there deserves extra scrutiny.
YET WHAT I find humorous about this “scandal” is the fact that it comes through loud and clear that the cops up near the Illinois/Wisconsin border don’t have a clue what to think of the growing Latino numbers. I’d argue a lot of the behavior here is their confusion and ignorance – nothing more.
Not that ignorance justifies anything. Just as the old cliché “Ignorance of the Law is no Defense” is true, the reverse also should apply. Police who don’t know what they’re doing don’t get an excuse to abuse one’s rights.
For those of you who couldn’t be bothered to read the Tribune on Sunday, their report indicated a large number of tickets and arrests for minor offenses whom, when the reports were written up, the would-be perpetrators were identified racially as “white.”
So the statistics that ultimately came out of McHenry County would indicate a lot of white people being targeted. And how could that amount to racial profiling?
THE NEWSPAPER WENT so far as to quote officials who said they were told specifically to do such acts so as to protect the sheriff’s department from undue scrutiny, while also pointing out that state laws requiring collection of racial data don’t give police a clue about what constitutes each race – leaving it to the cops to figure it out for themselves.
To me, what this means is that there are law enforcement officials who are a few decades behind the times. Because there was a time when the idea of Latinos (then, they might have been referred to as Hispanics) being thought of as white (or maybe a different type of white) would have been totally in compliance with common thought.
I remember my own reporter days with the now-defunct City News Bureau of Chicago, where back in the late 1980s there was a year-long stretch when I focused almost exclusively on crime and law enforcement activity.
It was among the routine details to get from a police report as to the race of the would-be perpetrator. “White” or “black.” Occasionally “Asian.”
BUT THE MOST common variant from those themes was when Latinos came to the attention of the Chicago Police Department. I lost track of the number of “male, white Hispanics” whom I wrote stories about.
I more readily remember the cases when someone was identified as a “male, black Hispanic” because they were so rare. Unless a Spanish-speaking defendant was so incredibly dark-skinned that it would have been a joke to think of them as “white,” the perception was that Latinos were “white.”
Which was a common perception of the past. I recall when Ken Burns did his documentary series about World War II and got hit with criticism that he deliberately downplayed the contributions of Latinos living in this country back then – even in the segments that focused on Southern California (where Burns found the story of people of Japanese ethnicity being interned in camps to be more interesting).
His defense was that the military records of the era lumped who we think of as Latinos as merely “white,” treating them like other ethnicities (such as Italian or Greek) that weren’t, strictly speaking, Anglo-Saxon in origin.
TO ME, IT seems that we have some cops living in the past, still using an old thought process. A part of me wonders if “Negro” is still a term that gets tossed about by some of these law enforcement types.
So I’m not so willing to see this as a cover-up, as much as an expose – of the police officer ignorance, which in many ways reflects the cluelessness of the rest of our society.
Not that Latinos ourselves make this issue any more easy to comprehend. Because a lot of us don’t agree on where we stand racially – other than to admit that “Latino” is really a collection of ethnicities.
The reality is that Latinos can be of any race, and those of us who are honest about our racial backgrounds will admit that there’s probably a mixture in our family trees.
ONE OF THE statistics that I’m most interested in seeing from the 2010 Census is the one related to the racial self-identification of the Latino population – which at just over 50 million people accounts for one-sixth of the United States as a whole.
I want to see how much of a change there is – if any – from the 2000 Census population count. A decade ago, 48 percent of Latinos themselves identified as “white,” while 42 percent chose “other” and found some way to complain that “Latino” (or “Hispanic”) wasn’t considered a race, in and of itself.
You could make the argument that if even Latinos don’t fully agree on race, how can we expect some flatfoot cop to know better?
And that characterization of police officers is just as ridiculous as the thought by some law enforcement types that a growing Latino population is a problem they must address – instead of just the continuing evolution of our nation.
-30-
Posted by Gregory Tejeda at 12:01 AM

These are very valid points. We ran the story in today's Hoy to make sure Hispanics got a chance to read it.

The problem is not so much that the statistics are fudged, which is its own problem, but the atendant consequences of minor charges.

I wrote about this several years ago while at the Chicago Reporter and the unfortunate reality is that these stops can lead to deportations.

Would you be interested in sending us your thoughts in Spanish? So that we could publish them in the paper in our opinion section?