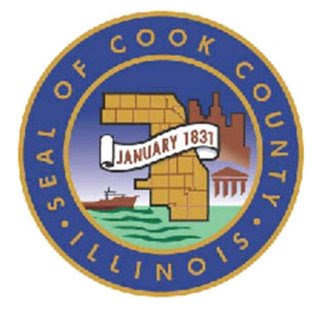 rning, albeit one that went over the heads of many of the police personnel he was speaking to.

But his joke, about the government budget process, really isn’t a laughing matter.

DART ATTENDED A school safety forum at a southwest suburban Palos Heights high school when he told the police and school officials in attendance how close he came to having to put on the whole show by himself.

His “punch line” was that the show would have been awful because he is dreadful when it comes to the technical skills necessary to operate the needed audio-visual equipment.

What spared a high school cafeteria filled with cops from across the county from having to endure a solo performance by Dart was the fact that the Cook County Board managed in the early minutes of Saturday to approve a budget for county government operations.

That budget means that ALL county government employees, including officers with the Cook County sheriff’s police and guards at the county jail, will keep going to work since there will be no interruption in their pay. Such an interruption was a very real possibility because the county was required to have a budget ready for the county president’s approval by the end of February.

WITHOUT AN APPROVED budget, government operations are forced to shut down, as the people who created Cook County government so many decades ago figured it was not a good idea for government to operate with NO spending plan in place.

There was talk that a judge could have been found to force a temporary budget maintaining spending at last year’s levels so that the county could keep operating until politicos could get their act together on a budget.

But it is good that a temporary solution will not have to be used. The early Saturday budget approval by the county board prevents a lot of negative things from happening.

That budget plan will more than double the county sales tax – boosting the total tax on goods purchased in Chicago to 10.25 percent (the highest sales tax of any major city in the United States). The rate will vary in the Cook County suburbs depending on which town one is in, but it won’t be significantly less than Chicago’s rate. The increase will allow the county to raise an extra $426 million per year.

NOW I KNOW some people will complain about anything resembling a tax hike. But I am glad officials were able to reach agreement and approve something, because there is nothing more disgusting than a complete shutdown of the services that we have come to expect from the county (from a quality hospital to the jail and from many human services programs to the sheriff’s police – the latter two of which are very important to the roughly 2.1 million Cook County residents who live in the suburban part of the county).

A government shutdown is just stupid, and the fact that some politicos are willing to allow them to happen rather than engage in serious budgetary negotiations is just the ultimate in political pigheadedness.

For people who pay attention to the Statehouse Scene in Springfield, such shutdowns are a reality.

They occurred in 1991, then again briefly in 1993 and for a short time last year when the General Assembly allowed the fiscal year to lapse on June 30 without an approved budget in place.

WHAT HAPPENS IN such instances is that government continues to collect the tax monies and other revenue it is entitled to. Money is in the state bank accounts, just as it would have been in place in the county funds.

But without a specific plan in place for how money is to be spent, nothing can be spent on anything.

Those people who actually rely on the state (or county, in this case) for their income are the ones who suffer. Their paychecks don’t show up. Or, if they rely on direct deposit, their bank accounts do not get the financial infusion that they have come to rely upon to pay their bills.

IN THE REAL world, debt collectors really don’t care that your income is on hold. They just want their money. It would have been that low-level worker in a county agency that most likely would have suffered.

And when you have people screaming at you for their money, or when you are unable to buy needed groceries or pay the rent, it really isn’t that comforting to know that once the politicos do approve a budget, you will eventually get every penny you are owed.

I remember when the General Assembly failed to approve a budget on time, what was most disgusting about watching state workers (give them a break, even if those motor vehicle department people seem lazy, see how you’d respond to a missed paycheck) be put in financial limbo was knowing that the reason the delay was occurring to begin with was that Illinois House Speaker Michael Madigan, D-Chicago, was playing political chicken with then-Gov. Jim Edgar, trying to see just how far he could push him before one of them would crack.

What the county did is also definitely better than the ridiculous fiasco that occurred last year with regards to Chicago mass transit funding, where Gov. Rod Blagojevich kept coming up with legal tricks to justify sending a little extra money to the Chicago Transit Authority, while leaving the long-range solution up in the air while he and the legislative leaders (including Madigan) quibbled.

SO AS FAR as I am concerned, the next time I hear someone complain about county President Todd Stroger and the county board of commissioners, I’m going to have just one thought.

They’re already behaving more professionally than the geeks we send to Springfield to sit in the state Legislature. It would have been the ultimate tragedy if county government had decided to give us an encore performance of what we political junkies have seen happen at the state level all too many times.

EDITOR’S NOTE: The county board narrowly beat a legal deadline for approving a budget (http://newsblogs.chicagotribune.com/clout_st/2008/03/stroger-cook-co.html) for the upcoming fiscal year.

Here’s where the county is publishing its own analysis of what is in the budget compromise (http://www.co.cook.il.us/2008_budget1new.htm) they approved early Saturday.

This (http://www.chicagotribune.com/news/local/chi-trice_03mar03,1,2682363.column) could be the change voters are thinking of when they look seriously at the presidential aspirations of Democrat Barack Obama.

The concept of a Cook County government shutdown was so real that officials (http://www.thetimesonline.com/articles/2008/02/26/news/illiana/doc47fab01c14c96d97862573fb00061986.txt) were planning for it, trying to determine which services could be classified as “essential” so that they could be maintained even without a budget.

Cook County’s budget situation was considered newsworthy enough to warrant a mention (http://www.iht.com/articles/ap/2008/03/03/america/State-Spotlight.php) in the International Herald Tribune, while it probably created a few snickers among the local folks (http://www.wthitv.com/Global/story.asp?S=7944398) in Terre Haute, Ind.
Posted by Gregory Tejeda at 12:00 AM