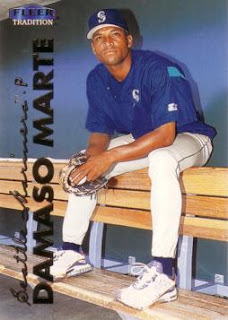 But what I recall was a pitcher from the Dominican Republic who always seemed to be capable of blowing ballgames. He ultimately became the last pitcher one would want to see in a crucial situation.

THAT EXPLAINS WHY the only reason he got to pitch in that ’05 series was in that Game 3 that went deep into extra innings. There weren’t many pitchers left by that point.

So imagine my shock to watch the World Series Wednesday night and see Marte come in to pitch for the New York Yankees, face two batters, and strike both of them out!

And with three straight strikes to each. He particularly made Ryan Howard (the Philadelphia Phillies’ star slugger) look like a chump.

It’s too bad he couldn’t have been that overpowering when he pitched on the South Side. Perhaps White Sox fans would have had more to look upon this decade than one lone American League championship (winning the World Series is an added bonus).

ANYWAY, MARTE’S APPEARANCE set the stage for long-time star relief pitcher Mariano Rivera to come in and finish off the game, giving the Yankees a victory and their first World Series victory in nine long years.

For Chicago baseball fans, the key moment may very well have been commentator Ozzie Guillen's post-game promise to be back at the World Series in '10. Some Chicagoans are going to hold the White Sox manager to that promise.

And now, those of us who want a baseball fix will have to either wait it out until late February and Spring Training, or start paying attention to the professional leagues in Mexico, Puerto Rico, Venezuela and the Dominican Republic – which began their seasons in mid-October and will play towards a championship in the Caribbean Series come early February.