I have always thought that the Chicago Cubs and their fans trying to blame their decades of failure upon a goat was one of the stupidest tales I had ever heard. Yet now I can’t help but wonder if the latest nonsense talk coming from the District of Columbia is even more pathetically lame.

Admittedly, the newest concept of a sports-related curse is coming from the Baltimore Sun. Asking anybody in Baltimore what they think about Washington is about as relevant as what any South Sider thinks of the Cubs.

BUT THE TALE told in a commentary published by Baltimore’s daily newspaper (one owned by Tribune Co.) claims that it is the ghost of John Wilkes Booth and his conspirators to assassinate President Abraham Lincoln and other high-ranking U.S. officials who are causing the Washington Nationals baseball team to be so god-awful pathetic.

I guess nobody wants to look at the team’s pitching or lack of hitting. Better to come up with a cockamamie tale whose only logic is that it makes the tales of the Billy Goat curse on the Cubs sound sensible by comparison.

We all have heard the Cubs curse. William Sianis, founder of the Billy Goat Tavern tried to bring the bar’s mascot with him to a game at Wrigley Field of the 1945 World Series against the Detroit Tigers.

SIANIS, WHO WAS from Greece, was supposedly so offended that he put a Greek curse on the team, proclaiming it would never again play in the World Series. To date, they haven’t. Even the few years when they have won a division title to make it to the playoffs, they have managed to find a way to screw things up (Leon Durham, Steve Bartman, etc.) and lose. 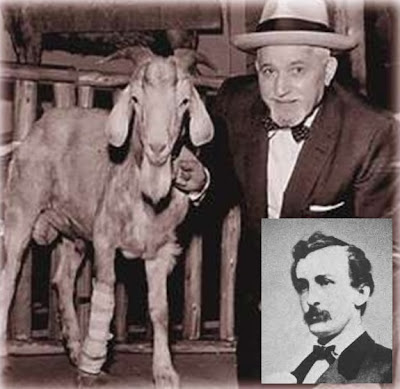 What is most likely. The Cubs have been bad because of a goat, the Washington Nationals are cursed by John Wilkes Booth (inset), or both teams just have mediocre-to-bad ballplayers?

Personally, I always thought it stupid that people would want to believe in a curse that team officials supposedly brought upon themselves for doing the right thing in not letting an animal into the grandstand.

This curse lives on because Sianis’ nephew, Sam, is more than willing to play along with the story, because every time he gets interviewed it generates more business for the tavern that he took over when he uncle died nearly 40 years ago.

This bizarre tale becomes so logical when one compares it to the new curse, which just strikes me as a geeky history buff trying too hard to make a connection between the past, and crummy ball clubs of the present.

THE REASON THE Washington Nationals of today are no better than the Washington Senators teams of old, the curse claims, is because of the brand-new, nice and shiny new ballpark that was built for the team in Southeast D.C. along the Anacostia River – which is the boundary that separates official Washington with all its gleaming marble government buildings from its urban neighborhoods that only life-long residents ever set foot in.

It is the same spot where the U.S.S. Montauk was once docked in 1865 when officials did the autopsy on Lincoln assassin Booth. The ship was docked there because it was the site of Fort McNair, which is where four co-conspirators were executed by hanging in July of that year.

For awhile, Booth’s body was buried nearby.

So the curse entails that that Booth and his buddies hated this country so much, including baseball because it was a game developed in the north and spread to the south by U.S. soldiers. Lincoln himself supposedly enjoyed the game as well.

SO IS THE existence of a dreadful Washington Nationals ballclub truly because of the ghosts of Confederate sympathizers wishing to torment something so blatantly American as baseball? Or does this tale stink worse than the goat did back in 1945?

I guess it can be frustrating when one is rooting for a team that thought it was getting a big break when it gained the rights to one of the top pitching prospects in the nation in Stephen Strasburg, only to have him suffer an arm injury that could turn him from the next Bob Gibson to the next Mark Fidrych – if he’s not lucky. Here’s hoping for Strasburg’s sake that surgery does cause his arm to recover, and that he will regain his pitching form within the next couple of seasons.

For if it doesn’t, we’re going to run the risk of having this Booth curse take hold. We could even get a competition going between which city – Chicago or Washington – has the more outlandish sports curse tale. Because anyone with sense knows that the real curse isn’t that a goat wasn’t allowed into Wrigley Field some 65 years ago.

The real curse on Chicago sports fans is that so many people see the way Cubs fans adore their decades worth of mediocre ball clubs that they figure all of us Chicago residents are willing, if not eager, to root for “lovable” losers in all fields of life.